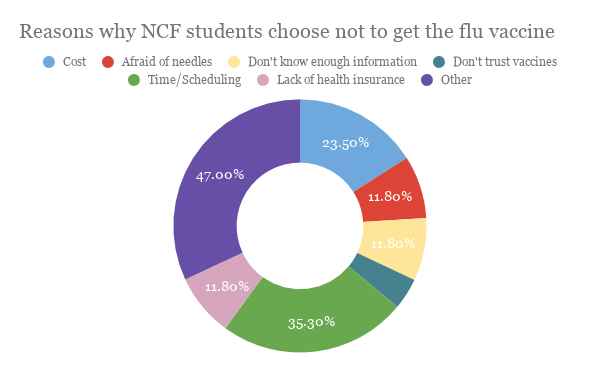 Alexandra Conte/Catalyst Poll results of reasons why NCF students choose not to get the flu vaccine.

November marks the start of influenza (flu) season in the United States, which peaks in the winter months according to the Center for Disease Control (CDC). The CDC reported that last year around 80,000 Americans died from the flu, the highest death toll from the flu since the 1970s. There has been a significant drop in vaccination levels throughout the last seven flu seasons. A study conducted by the CDC revealed that only four in 10 adults received a flu shot last year.

The CDC recommends people get the flu vaccination in October before flu season begins as well as year round. The point of the flu vaccine is to prevent people from getting the flu, and the vaccine’s formula is changed each year based on the strains researchers believe will circulate that year. If a vaccinated person manages to “catch” the flu, their reaction will be less severe than those who were not vaccinated.

“I like having a strong immune system and I don’t want to get other people sick on campus,” first-year Grace Sherman said.

In response to the survey, 11.8 percent of participants listed a fear of needles as a reason for not obtaining the vaccine. The nasal spray vaccine is the best option for those who have a fear of shots, although the CWC does not carry the nasal spray vaccination as an option for patients. Of the respondents, 48.5 percent were not aware that a nasal spray existed as an option for flu vaccination. Unlike the shot, the nasal spray contains live strains of the flu virus. The CDC assures that the flu cannot be contracted from the spray because the strains are too weak and are cold-adapted, which means the strains can only multiply in the cold regions of the nose and will not survive the warmer temperatures of places such as the lungs.

NCF and University of South Florida Sarasota-Manatee (USF-SM) students, including those who are uninsured, can receive free flu shots at the Counseling and Wellness Center (CWC) year-round. Passport Health in Sarasota and Bradenton offers the flu nasal spray as a vaccination option, as do most general practitioners. The spray generally runs around $22 to $30 per vaccination for those without insurance. Publix gifts patients with a $10 gift card after receiving a flu vaccination at any Publix pharmacy. Without insurance, the vaccine costs $30 at Publix. The flu shot is free for those with insurance and appointments are not necessary. Additionally, the Health in Motion bus provides free flu shots to NCF students. Students can check NovoConnect to see when the Health in Motion bus will be on campus.

Information for this article was gathered from the Center for Disease Control, CBS News, Arizona Daily, WJJ Newsradio Fox News and TIME.