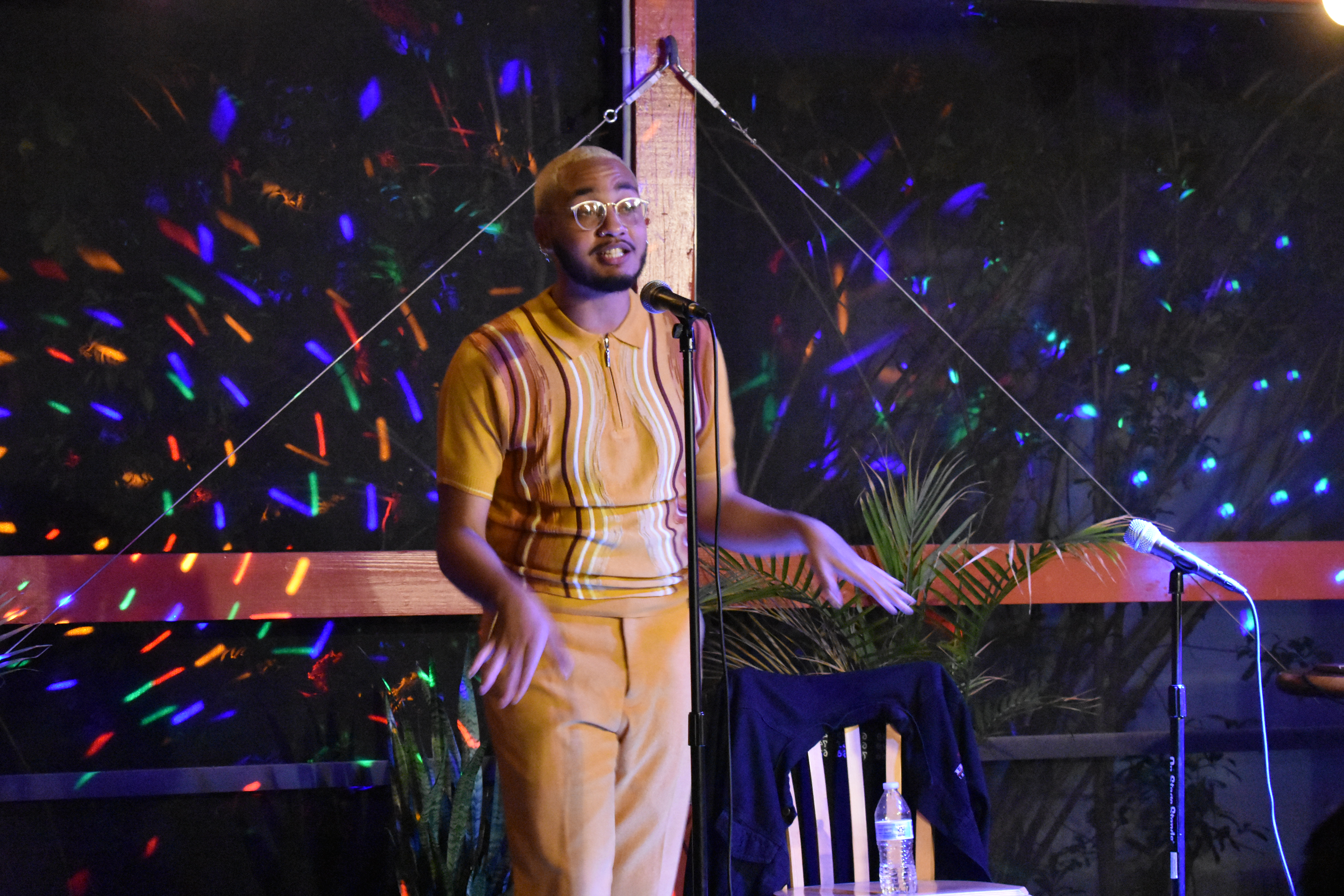 As he writes about pain and loss he has experienced and the tools he used to navigate it, he hopes “if folks are going through the same thing, here are the tools that you could possibly take with you to help shape space,” he said.

“More poems?” Hood Profet, formally Mike Davis, asks the crowd gathered to see him perform. The crowd responds with murmurings of yes and snaps. He goes on.

Hood Profet, a spoken word artist from Los Angeles, performed at the Fourth Annual Black History Month Open Mic Night, on Friday, Feb. 8 in the Four Winds Cafe. Before the open mic began, he led a grounding exercise with the audience. In one exercise, Hood Profet instructed the crowd to think of something they wanted to bring into the space and manifest it between their palms. Then, together they called it into the space, starting with a whisper and slowing rising to a loud scream.

Students, members of staff and faculty and alumni also performed at the open mic. The performances varied from poetry and prose to music.

Before Hood Profet began his performance, he stated that art is a form of healing but that he didn’t feel like he needed to explain that at New College. Barefoot on stage, he opened up the space for discussions and comments from members of the audience at any time during the performance.

“Whenever I do anything, I feel like it’s important to tap in with folks while you’re on stage,” he said. “Or else it becomes this repetitive, weird thing where it’s like you’re screaming at people and nothing really resonates.”

Hood Profet approaches poetry from an organizer’s standpoint. He feels as if his job is not only to talk about his pain, but to show others how he got through it in hopes that it might help them as well.

“So whatever I write about is like, yeah, this is fucked up, but here are the tools that I’ve used to navigate it,” he said. “And if folks are going through the same thing, here are the tools that you could possibly take with you to help shape space, which is also stemming from an organizing point of how do I give folks tools to exist and navigate.”

Connecting with people, helping them and offering spaces to heal is what drives his work. Although “poetry has always been there,” when he was growing up he used to tell people he wanted to be a psychoanalyst or a therapist.

“When I started teaching, I remember going into a classroom and seeing a boy that looked like me light up when I walked into a room and then I was like, ‘Oh yeah, this is what I do this for, for people that can resonate with whatever it is that I have to say, that I can offer tools to, to maneuver, that they might not have found somewhere else.’”

He also touched on what vulnerability looks like in his work, and the balance of making art for himself and for other people. It has been a journey of letting go: letting go of the fear of how people will consume his art, the fear of fucking up and the fear of people not understanding it.

“So it’s been a thing of me like, how do I just exist, you know, or how do I just actually use this as a thing for myself?” he asked.

All of the work he does is rooted in healing. For Hood Profet, his overall goal is figuring out how to build sustainable things for folks to use.

“I feel like we always talk about fighting and dismantling and breaking and doing away with things and we don’t talk about like, ‘Okay, cool, so after the system’s dismantled, what are the systems that we’re now putting into place or what are the actual abilities that we have that offer resources to communities?’ he said. “Even with open mic was the first time that I was like, ‘Okay, this is a sustainable space that people can come to to heal and check in and build relationships with folks and community and other things. So I think using that same idea, but expanding on it significantly.”