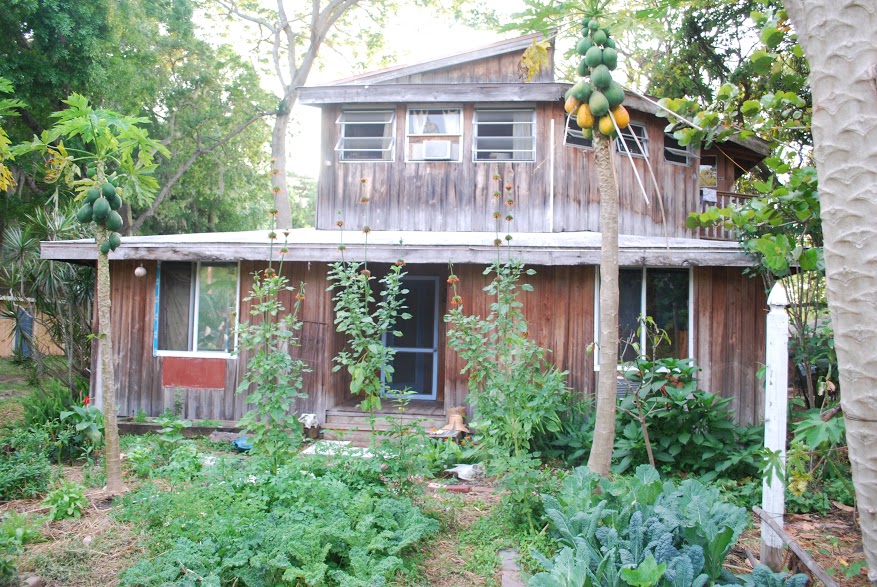 There exists a house that is near and dear to the hearts of generations of New College graduates. Many current students know of the house and some frequent it still. Those who have heard of it know quirky facts about the place, like about the tree trunk built into the stairwell, the weekly communal dinners and how the structure was built by a New College student in the 90s. The house – if you haven’t guessed by now – is the 47th Street House.

In 1990 (or 1991), a New College student in his 30s by the name of Al Leonard bought a piece of property on the corner of Old Bradenton road and 47th street. Leonard would not finish his degree at New College but he would finish building a two-story house from the ground up.

“He had this vision for a house and he was hoping to get $100,000 in his pocket because he thought if he had $100,000 and he was really smart with it he could retire,” alum and current landlord of 47th street house Casey Schellhorn said. “So Al bought it, Al built it. I think he bought the property for like $10,000. Claims he spent $40,000 in materials. He’s got this perfect photographic memory of every detail- every design.”

The house was built slow and steady, over a decade or so. Leonard added onto the structure here and there until it grew into a seven-bedroom home with a spacious kitchen, an office and a sun-lit living room with a library built in. He immediately rented the place to New College students, as was the plan from the beginning.

“I think he had originally intended on living here too and imagined it as somewhat of a communal house,” Schellhorn said. “He was into communal living.”

The house, with its past and current residents, easily live up to Leonard’s hopes for a communal space and lifestyle. Weekly dinners are still a staple and chores are portioned out.

“Every few months someone will show up at the door and be like hey I used to live in this house!” Schellhorn said. “I’ve gotten stories and met with these different people over the years and got a sense for what it was like. People who’ve lived here always seem welcome, you know, they welcome themselves right on in and I always welcome them in too.”

In 1990, where the 47th street house stands now was an empty lot. Empty, if you didn’t count all the overgrowth that was piling up there. Al Leonard did. It was in his way.

“So what he did was he and his girlfriend and a bunch of people came over here and acted like they were gonna deep fry a chicken,” Schellhorn said, already laughing. “Meanwhile, he went and poured gasoline over the whole property and pretended that they had accidentally caught the property on fire, in the process of deep frying this chicken. When the firemen came, all the brush he didn’t want had burned.”

Apparently the firemen were suspicious of the ordeal – the smell of gasoline is pretty distinct – but they let them off the hook anyway.

Leonard stuck around as landlord of the house until moving to Punta Gorda at the turn of the century. He remained an absentee landlord until 2006 when he sold the house to a Carmen Palomino for $250,000. Palomino added a whole new level to absentee owner.

“She bought it sight unseen, never came to the place, never helped fix anything,” Schellhorn said. “The tenants at the time paid her rent every month for a couple of years. Then, they started getting letters from the bank and found out that the woman wasn’t paying her mortgage and so the bank had started the process of foreclosure.”

An article written for the Sarasota Herald-Tribune in 2008 quoted Palomino explaining that she couldn’t afford to pay the mortgage due to an increase in her homeowners insurance. The case was just one of thousands of foreclosures at the time, when reparations to the Housing Market Crash of 2007 had only just begun.

But this was a special case, a community was being kicked out. By then, the 47th street house had moved into it’s own and become something of a “little democracy,” April Doner, a tenant at the time and an NCF alum, is quoted saying in the Herald-Tribune article.

The tenants living there then made a concerted effort to buy the house but HSBC bank, the bank which held the unpaid mortgage, refused their offer. At a public auction, HSBC gained rights to the house with a bill of sale for $100. Sounds like a game of Monopoly, right? The bank virtually owned the house as soon as it started paying off Palomino’s defaulted homeowners insurance but, nevertheless, it was a painful sight to see go under the noses of the then current residents, who were present at the auction.

The house’s history gets stranger before it gets safer. With the property in the hands of the bank, a now vacant house stood free of rent.

“The house went through a quick degradation,” Schellhorn said, rather solemnly. “One guy invited a bunch of really tough, out of luck people to live there. I think the original intention of the time was positive, to give people in need a place to stay. I just think it was poorly managed. During that period, people put like padlocks on their doors and graffitied up the place.” Schellhorn sanded off some tags upon moving in.

“People living here before were worried that the house was going to get destroyed. It was a free for all. Some guy was planning on taking all the cyprus off the outside of the house, which i’m really glad he didn’t.”

The house remained in a state of limbo for several months before the bank put it up for sale. That’s when things started to turn around. The people living there were evicted and Schellhorn saw the chance to buy the house cheap, an opportunity he seized with haste.

From outside, the 47th Street house looks like an enormous treehouse. In a sense, that is exactly what it is, despite its being on the ground. The house is built with something like a dozen different types of wood: Cyprus, Cedar, Australian Pine and American Walnut to name a few. Every room smells like another variation of woody musk.

“A lot of the ways Al built the house is atypical,” Schellhorn said. “He built with this technique where he built with the framing exposed, showcasing the wood- whereas in other houses it’s hiding behind the drywall. When you look at it you’re seeing the frame and the actual framing of this house is beautiful old growth pine- resin pine is a general classification. It’s this really dense, really heavy heart wood of old pine trees. A two by four of resin pine weighs like 4 or 5 times what a two by four of like the kind of pine you buy at Home Depot.”

I asked where one gets this special pine (because I like to pretend I can build things) and received a dispiriting answer: you gotta have connections.

“In the case of Al, his girlfriend’s father owned a sawmill out in Arcadia,” Schellhorn explained. “So he had this connection that enabled him to get this beautiful wood. What’s cool is he really showcases the lumber and the framing is done in almost an artful way. There’s parts of the house where you can see these cool triangle, geometric patterns that are all showcased.”

Schellhorn does carpentry work himself, finding renovation jobs around town but also setting up displays for exhibits at Ringling Art museum. During his time at New College, he worked at the sail club fixing up boats. But his true love is the 47th Street house. He’s done everything from completely renovating the kitchen to plumbing and electrical fixtures. “It would’ve been insane to buy this house if you didn’t have an aptitude towards fixing it.”

Interestingly, the house was constructed without a central A/C system. Instead, it is well-designed for air flow. Vents built into the roof of the house allow heat to escape and cool air to come in.

“It’s a tall house, the very peak of it is probably 30 feet, and the basic principle is that heat rises and if you create a vent at the very top, you create what’s called a chimney effect whereby it actually creates suction and what it does is it pulls in air,” Schellhorn explained. “Even on a day with no wind, theoretically you’ll have a breeze flowing in.”

Most of the bedrooms in the house are tucked into corners or spaces created out of the larger, common living areas. Surprisingly, none of the bedroom walls are touching so there’s a nice element of privacy. Without a doubt, the house was built to home many.

“It was awesome, I’ve never lived with so many people,” Robert Kelly, a previous tenant of the house, said. “We had chickens, there was a newborn baby, a dog. We made it work. Everyone had different enough schedules so we weren’t clashing. In the summer, I had the whole house to myself. When I had the freedom to choose whatever room to be in I would go through all of them. Sleep in one room, another the next night.”