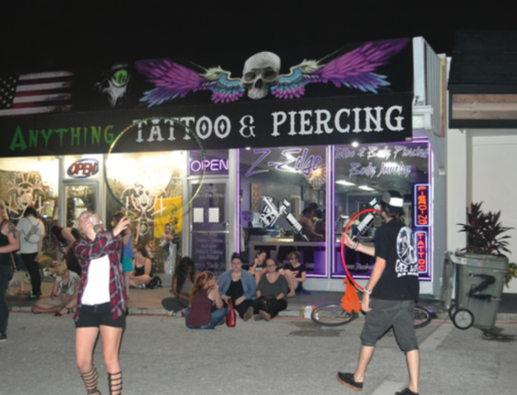 From noon to midnight on Sept. 18, the curb outside Z Edge was filled with individuals waiting to get pierced or tatted while they enjoyed the smell of Korean food from a local food truck and listened to the sound of EDM being blasted by a live DJ. Z-Edge tattoo and body piercing celebrated its 10 year anniversary by offering $10 piercings and $30 tattoos to the hundreds of students and Sarasota locals who showed up to their Siesta Drive location. By 11 on Sunday evening, the shop had performed 121 piercings and 87 tattoos. For those who couldn’t wait in front of the store all day, numbers were given out deli-style to keep the queue moving. For those who did choose to wait, Z-edge provided vouchers for anyone who was still waiting in front of the store when they stopped taking new customers at around 11 p.m.

“The event coincides with Crea’s, the owner’s, birthday,” Brian Lee, a notary who was working the event, said.  “We’ve processed a total of 538 people so far. We’ve done almost 150, and all the people that haven’t been served at this point – if they are present at 11 – they will get an overflow appointment.”

The event was intended serve as a sort of nightlife event for young people in the area, providing a safe and entertaining place for people to hang out while they waited.

“Sarasota doesn’t have enough nightlife in general, and the event was actually permitted and everything through the county so we can play the music as loud as we want because we’re not right next to downtown,” Lee added.

Along with entertainment, the event featured a medical bus offering free blood testing for a variety of blood-borne diseases such as HIV and Hepatitis C – an often overlooked risk of body modifications.

“I was really pleased and impressed with the quality and experience of my industrial piercing,” third-year Mei-Jing Bernard said. “It was really impressive how well they handled the intense amount of people standing in line and I was really pleased that they did overflow appointments. Overall, strong sat.”