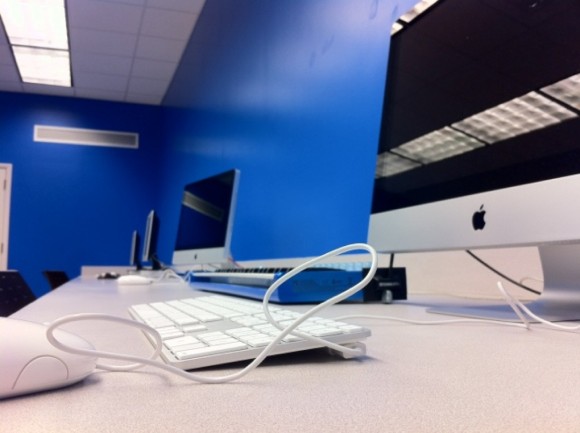 photo courtesy of Alex Wyllie
The Mac Lab is now more compatible, installed with programs from photoshop to statistical analysis, it aims to fulfill a diverse range of student needs.

This year the Mac Lab is getting a face lift after years of printer complaints and the recieving of $4,000 dollars from the Students Reserve.  Along with the electronic card-lock that now outfits the Mac Lab’s entrance, the money will hopefully provide the renovations necessary for a more efficient and easily usable Mac Lab.

The money was primarily spent on 4 new 21.5 inch iMacs and a new printer/scanner.  Along with these new additions however Mac Lab TA, Alex Wyllie has been working to fill the computers with as many useful programs as possible. Each computer has been installed with the typical Lion program as well as Windows 7, a free-imaging program called Rhino3D, VLC Media Player, and SAS programs (statistical analysis system).  Each system runs Microsoft Office 2010 and 2011 and will hopefully soon carry Photoshop, and Adobe and Acrobat Pro.

“Everything else will be taken out until we have just those four macs, the two printers—one new with a scanner, an electric stapler, a three-hole punch, and a wireless router,”  Wyllie said. “The wireless router will give us access that isn’t based off of the whole hotel system the school has, all you’ll have to do is enter the password once.”

The ideal being that the Mac Lab will be more accessible to students, containing all the computer resources both a natural sciences and a visual arts student may need.

“Students can come in now and just use their own computers,” Wyllie extrapolated. “The printers will work—because the drivers are properly installed—and the new printer will have no problems unless someone opens it up and puts a screwdriver to it.