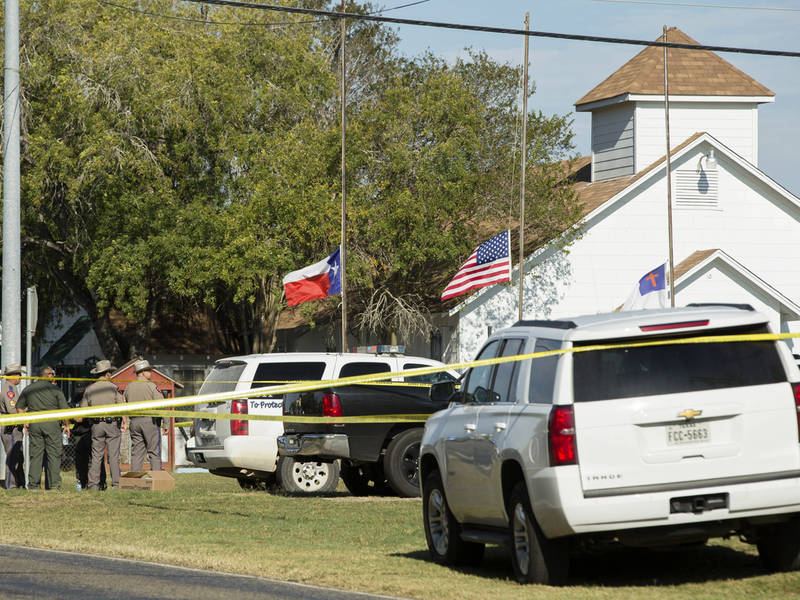 SUTHERLAND SPRINGS, TX - NOVEMBER 5: Law enforcement officials gather near the First Baptist Church following a shooting on November 5, 2017 in Sutherland Springs, Texas. At least 20 people were reportedly killed and 24 injured when a gunman, identified as Devin P. Kelley, 26, entered the church during a service and opened fire. (Photo by Erich Schlegel/Getty Images)

A gunman opened fire at a Sunday service at a small Baptist church in rural Texas, killing at least 26 people in the state’s deadliest mass shooting.

The gunman was identified as 26-year-old Devin Patrick Kelley, an Air Force veteran who was later found dead of a gunshot wound in his vehicle.

Kelley started firing not long after the 11:00 a.m. Sunday service at the First Baptist Church in Sutherland Springs, a tiny town east of San Antonio, Texas. He was armed with a Ruger military-style rifle and was dressed in all black with a ballistic vest strapped to his chest.

Within minutes, many of the parishioners inside the small church were either dead or wounded. The motive of the attack has not yet been disclosed by the authorities.

The victims ranged in age from 5 to 72. Among the dead were several children, a pregnant woman and the the 14-year-old daughter of the First Baptist Church’s pastor, Frank Pomeroy.

Both Pomeroy and his wife, Sherri Pomeroy, were traveling out of state when the shooting occurred.

A church member, Sandy Ward, told media sources that her daughter-in-law and three of her grandchildren were shot. Her five-year-old grandson was shot four times and remained in surgery Sunday night. She said she is waiting on more information about her other family members.

Freeman Martin, a regional director with the Texas Department of Public Safety, described the shooter in Sunday’s press conference as a young white male who was dressed in all-black “tactical-type gear.”

According to Martin, as the suspect left the church, a local resident used their own rifle to engage him. The shooter fled the church while the citizen pursued him.

After a brief chase, law enforcement officers found the suspect dead of a gunshot wound in his vehicle. Authorities said they don’t know if the wound was self-inflicted or the result of the resident who fired on the suspect.

“My heart is broken,” Wilson County Commissioner Albert Gamez Jr. told CNN. “We never think where it can happen, and it does happen. It doesn’t matter where you’re at. In a small community, real quiet and everything, and look at this.”

Of the 26 fatalities, 23 were found dead inside the church. Two were found outside and one died later at a hospital. It was the deadliest mass shooting in the state’s history. At least 20 more were wounded.

“It’s something we all say does not happen in small communities, although we found out today it does,” Joe Tackitt, sheriff of Wilson County said.

Information for this article was obtained from nytimes.com and cnn.com