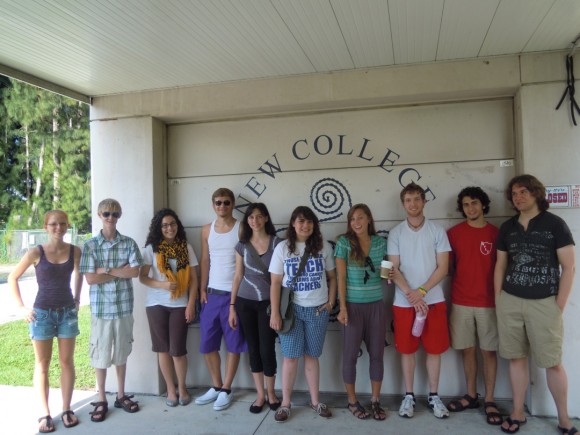 A group of first-years during Orientation.

This year, the incoming class really is larger, with 273 new students, compared to 222 last year. Of those students, 238 are new first years, while 35 are transfers. Director of Admissions Operations Molly Robinson (’99) said that New College is about where it wants to be in terms of the overall number of students. “It was a pretty big graduating class last year,” Robinson said. “We had to fill in spots for them.”

Fewer students applied to NCF this year (1,497) but of the students that were accepted, a larger proportion actually enrolled: 36 percent compared to 27 percent last year. “It hasn’t been that high for years,” Robinson said. “I think a lot of it has to do with many people not having jobs and so more students staying in state that would have gone out of state.” Robinson said that over the summer, 25 students usually change their minds about coming to NCF, but this year that number was only 18.

The incoming class includes 40 out of state students and two students above the age of 25. This year, 27 percent of new students self-identify as minorities, up from 20 percent last year. However, the male to female ratio is even more skewed, at 37 percent to 63 percent. This figure is more balanced when it comes to new transfer students only (49 percent male, 51 percent female).

Upperclassmen will have to meet the new students for themselves, but here is an ice-breaker: for the new class, the average combined SAT score is 1300 without the writing section, down 12 points from last year, and the most popular intended Area of Concentration (AOC) is literature, followed by biology, undecided and psychology.