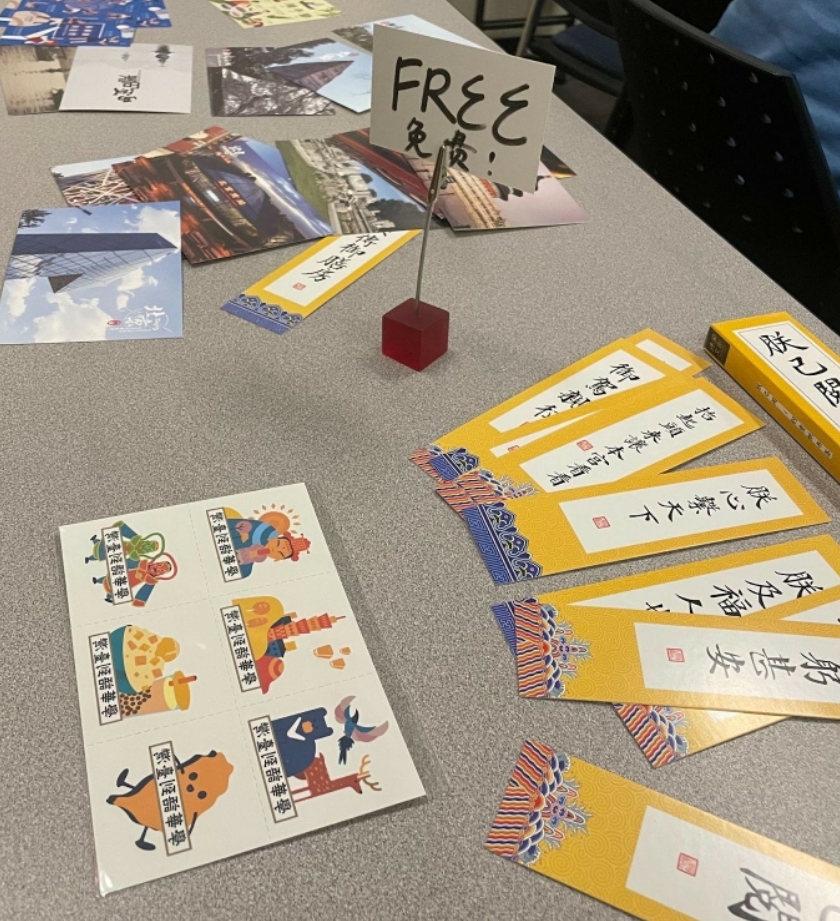 Rows of festive snacks and postcards welcomed students at the Lantern Festival.

Lunar New Year, also known as the Spring Festival, begins on the first new moon of the lunar calendar and ends on the first full moon 15 days later. Celebrated in many Asian countries, the traditions also vary—including, but not limited to: giving money in envelopes to younger people, “spring cleaning” and a slew of fish dishes. Feb. 15 marked the last day of the Lunar New Year festivities, the Lantern Festival being the traditional final hurrah held at a Jane Bancroft Cook Library classroom.

In China, it is typical to eat fish during the 15 day period—in Mandarin the word “yú” (fish) is a homophone for excess or abundance, the more fish eaten the more wealth and good fortune there will be in the coming year. The preparation for the festivities and the festivities themselves are all for the purpose of welcoming the new year with a clean slate, and making it so the future year will hold plenty of good fortunes for themselves and family members.

Superstitions during Lunar New Year are at an all time high: many actions, objects and words are either sternly avoided or used more frequently to dissuade bad spirits and welcome prosperity. Long noodles are often eaten to represent a long life—just don’t bite them. Dragon and lion dances as well as firecrackers are used to fend off evil spirits during the 15 day period of festivities.

Fulbright scholar and Foreign Language teaching assistant Zhan-Yan Zheng, organized and hosted the Lantern Festival at New College, meant to be the last celebration of Lunar New Year on the fifteenth day of the lunar calendar. Traditionally, families would have a lantern they would release on the fifteenth night in order to see the gods—now there is a great amount of craftsmanship that goes into lantern making, some of which are put on public displays for the occasion. The room was lined with good fortune snacks and lanterns for students to write wishes on. Releasing lanterns outdoors is illegal in Florida, instead there was rolled tissue paper that once lit on fire, flew upwards and wowed everyone present.