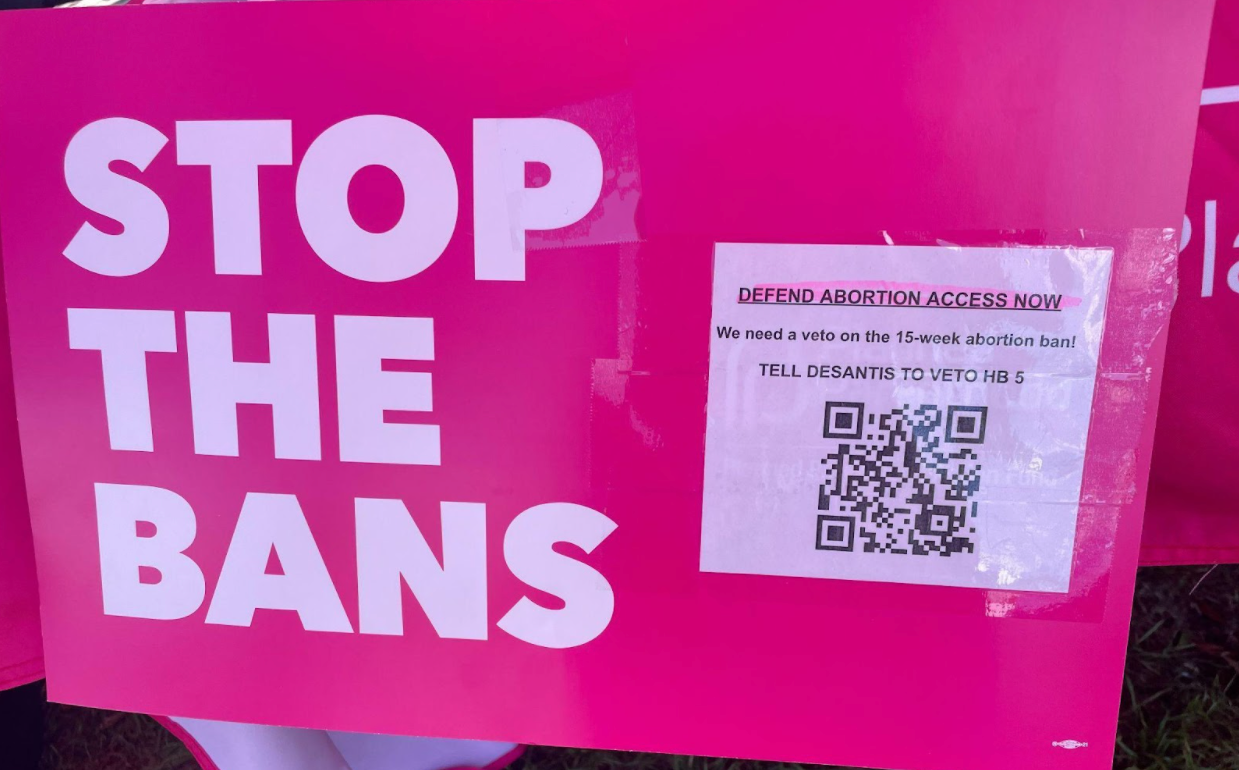 Planned Parenthood "Stop the Bans" sign hanging in their booth at Manatee Pride 2022.

Since 1973, American women have had the constitutional right under federal law to seek an abortion within 24 weeks of pregnancy. Recently, the U.S. Supreme Court heard a case in Mississippi—known as Dobbs v Jackson Women’s Health Clinic—where the Republican majority favored shortening the period in which a woman can seek an abortion or retracting the Roe v Wade decision completely. The decision in Mississippi is crucial to foreseeing how events may unfold in Florida, where Gov. Ron DeSantis—among many other Southern state governors—is likely going to sign into effect a similar ban to that of Mississippi’s. The Florida Legislature voted in favor 23-15 of House Bill 5—”Reducing Infant and Fetal Mortality”—on Mar. 3 after three read-throughs. It is currently expected to come into effect by July 1, 2022.

Organizations and individuals alike paid multiple visits to the Florida State Capitol over the last few months to speak with legislators in favor of and against the proposed bill. Senator Lauren Book (D-Plantation) provided a harrowing account of her personal experiences, urging the lawmakers to consider an amendment that would protect survivors of rape and incest. Her incredibly intimate testimony fell onto deaf ears and the amendment was rejected.

“Needless to say, we are super disappointed that the Senate has voted in favor of it and it will be going to Ron DeSantis’ desk,” Baker states.

“We were doing our civic duty and responsibility, we were at the Florida Capitol in Tallahassee with several students, supporters and volunteers,” Baker continued. “It was really unfortunate that the speaker Sprowls decided that we should not be able to be there in the gallery of the meeting. Students started to do some chanting and were forcibly removed by Capitol security. Our state-wide policy director, Lauren, was arrested by Capitol police. They were in jail for 18 hours for charges that were false. A judge even said there was no probable cause. We are seeing over and over again that our legislators, the people that we have elected to represent us, are not listening to us.”

As one would expect, there has been severe controversy surrounding the bill. The passing of it may not only affect women in Florida, but GOP lawmakers in roughly 26 states are looking to implement similar legislation. This may go one step further to mirroring Texas’ law: banning abortions just after six weeks.

“The measure is unlikely to affect the vast majority of abortions in Florida,” the Miami Herlad reported. “In 2021, the state recorded about 80,000 abortions. About 4,800 of those—roughly 6%—came after 12 weeks of pregnancy.”

Organizations like Planned Parenthood have worked across Florida to aid those in underrepresented groups, those whom the statistics may not embody.

“Republicans have often said the bill is reasonable because it is not a total ban on the procedure and still gives women enough time to consider whether to get an abortion, even in cases of rape, incest or trafficking,” NPR reported.

“We’ve done polling and it has been determined that over 70% of Floridians do not want to see a 15-week abortion ban, and they don’t want to see Roe v Wade overturned,” Baker added in response to comments made by lawmakers on account of the ban.

“We definitely identity as a reproductive justice organization with the distinction being that we recognize the disproportionate impact that abortion bans and lack of access has on marginalized communities,” Baker specifies. “We really try to have that inform our work at all times.”

The White House released a statement on Jan. 22 addressing the laws being created across the country in light of the possibility of Roe v Wade being overturned: “In the face of these challenges, administration officials reiterated the administration’s commitment to exploring every option to protect reproductive health care.”

This statement follows a rather disheartening State of the Union speech on Mar. 1 where Biden avoided the word “abortion” as a whole, as well as seemingly dodging other rather pressing topics.

“The constitutional right affirmed by Roe v. Wade—standing precedent for half a century—is under attack as never before,” Biden said during his address. “If we want to go forward, not backward, we must protect access to health care. Preserve a woman’s right to choose.”

Other historic bills have also passed through the Senate floor on Mar. 10, such as: “Don’t Say Gay” bill and the “Stop Woke Act,” both of which DeSantis publicly supports. The final decision looms near, all three bills are to either be signed into law or vetoed by DeSantis within the week.Visit this Planned Parenthood website for more information on each bill and how to contact your local representatives. Use this link to find where to call, email and tweet Gov. DeSantis.