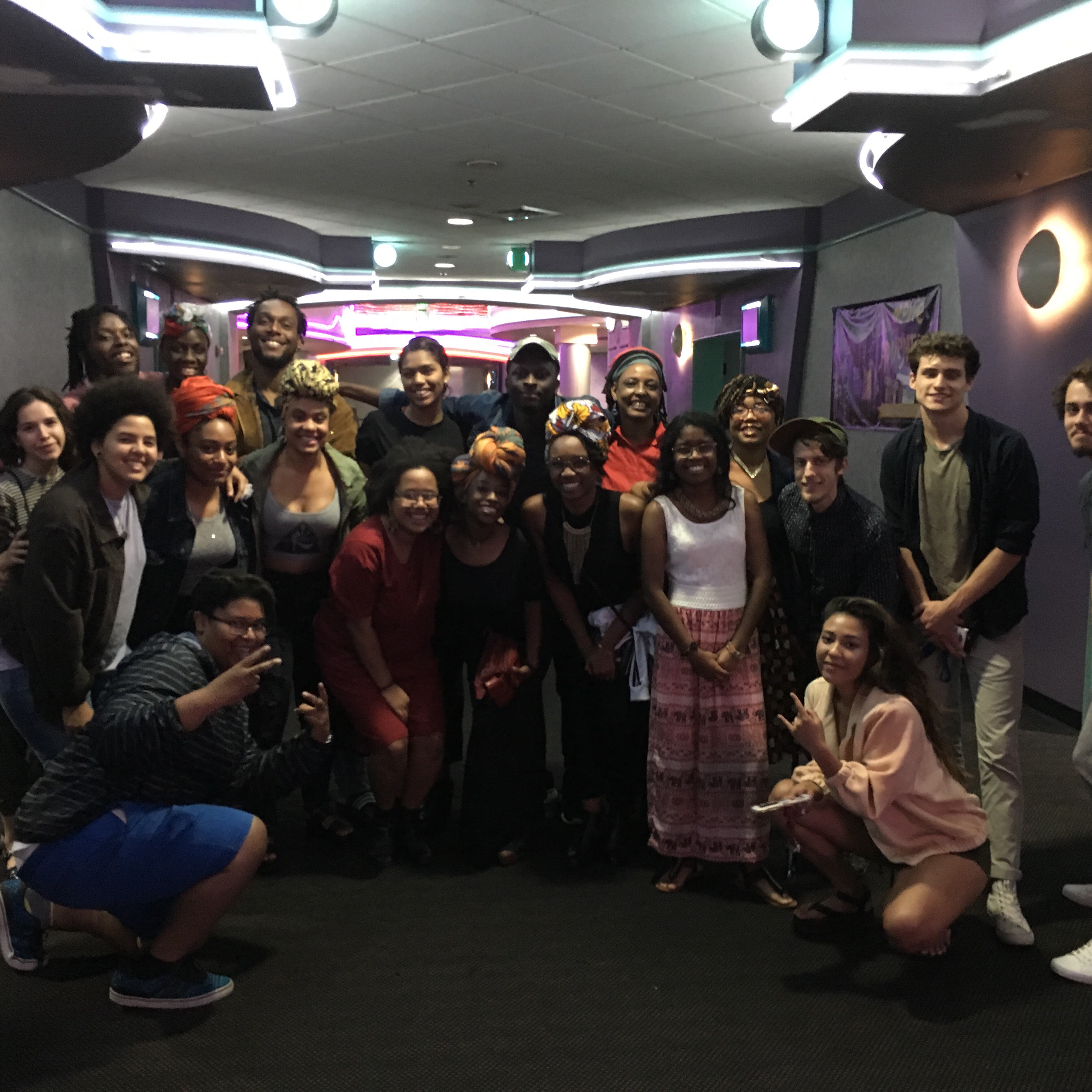 “Black Panther” took audiences on a journey to the nation of Wakanda, portraying its hidden technological advancements seamlessly intermingled into an urban, African space complete with bright costuming and breathtaking scenery. Set against this background was inclusive and intriguing fight scenes, which did not consist of the large-scale building demolition that Marvel movies are so often guilty of and, on the other end of the emotional spectrum, was tangible love, humor and growth shared between its characters. This fictional film unapologetically addressed real world issues of colonialism and racism and exemplified positive representation.

Before its initial release, “Black Panther” was intensely discussed, as it is not only culturally significant, but also personally significant to a large number of people.  With a nearly all Black cast and creative team, “Black Panther” graced the screen with representation that the Marvel Cinematic Universe (MCU) has been sorely lacking, making the statement to the many children watching that one does not have to be White to be a superhero.

Most would agree that the notion that people of color can be superheroes is not a startling one. However, leading up to the release of the film, it was first reported by the AV Club that White supremacist groups were threatening attempts to tank “Black Panther” ratings on Rotten Tomatoes by flooding it with bad reviews. Rotten Tomatoes responded with a statement to the Hollywood Reporter that it would not tolerate hate speech.

According to that same report from the AV Club, “Black Panther” broke pre-sale records and was top daily ticket seller on Fandango two weeks out from its release Several economic publications such as Forbes and CNN Money, reported that its debut on Thursday, Feb. 16, grossed $25.2 million domestically, surpassed “Captain America: Civil War” and was geared to have a blockbuster weekend. Given the records broken and the excitement surrounding the “Black Panther” release, attempts by hate groups were futile and noteworthy solely because they demonstrate the film’s cultural significance and the importance of continually working to combat racism in the movie industry.

The introduction of the first Black superhero–who was originally created in 1966–to the big screen was groundbreaking, as was the film’s portrayal of Africa. A 2015 Pan African Visions article by Ahmed Mheta, titled “Why Western Media Focuses on Negative Coverage of Africa”, discusses the harmful portrayals of African nations that are typical of American and European media.

“The presentation of African news by Western media convinces the audiences in United States, Europe and other parts of the world that the entire continent of Africa is hopeless, poverty and disease stricken,” Mheta said. “Images of skyscrapers, well developed road networks and other manifestations of modern development in most African countries are usually absent in the mindsets of Western media audiences.”

A 2007 Teaching Tolerance article, titled “I Didn’t Know There Were Cities in Africa!” demonstrated how, when asked about Africa, the average American pictures a monotonous land that largely consists of wildlife for adventure and safaris rather than 54 distinguished nations. The author, Brenda Randolph, did so by recounting the responses that a third grade class of children gave based on their knowledge of the continent and followed this with discussion of the nature of American portrayals of Africa and how early this skewed conceptualization is presented to American audiences, citing “Madagascar” and “The Lion King” as examples.

The fictional African nation in “Black Panther,” Wakanda, is shown to be the most technologically advanced in the world and its African characters are highly educated and capable individuals. For example, the main character, T’Challa, not only has superhuman abilities but also a Ph.D. in physics. This portrayal of an African nation stands in stark contrast to American media standards, which is one of the reasons that the reception has been overwhelmingly positive.

“It seems like this film directly challenges offensive tropes of representation of Africa, including the idea of Africa as a place populated only by wild animals and starving Africans waiting to be saved by White Westerners,” Professor of Anthropology, Erin Dean, said in an email interview. “It is obviously positive and long overdue to have a movie where the heroes are African, where they control superior technology and where they use it to challenge imperialism and racism. There is also a symbolically significant and empowering vision of the potential of a non-colonized African country.”

Dean does research on conservation and development in Tanzania and Zanzibar and had not yet seen the film when interviewed.

The hashtag #WhatBlackPantherMeansToMe appeared on social media in anticipation of the movie to highlight the importance of positive representation. #WhatBlackPantherMeansToMe was started by Kayla Marie Sutton, curator of the “Black Girl Nerds” podcast’s social media accounts. Since its creation, the hashtag has taken off on Twitter as a vehicle for conversation regarding the personal impact that the release of the film has to many people.

“This film is so unapologetically Black and growing up on the outside of the nerd community as an ‘other,’ to have a film filled with people that look like me and my family is the most amazing gift,” Sutton said in a direct message to the Huffington Post.

A notable reaction regarding the upcoming release, that was not completely positive, was that of Roxane Gay. Gay wrote the World of Wakanda spinoff comic series in 2016 until it was cancelled after six issues. One of Marvel’s vice presidents, David Gabriel, blamed bad sales on “diversity,” according to The Grio. Gay revealed in a twitter statement that she was not invited to the premiere.

“My feelings are real hurt that I didn’t get an invite to the Black Panther premiere,” Gay said. “I’m still thrilled about the movie and can’t wait to see it.”

Gay and co-writer, Yona Harvey, were the first Black women to be lead writers for a Marvel series and Gay’s lack of invitation is another example of how the contributions of Black women in entertainment are too often overlooked or underappreciated.

Audience reactions to the release of Black Panther include elation from Black children at seeing a superhero that looks like them and the joy from Black adults at finally seeing long overdue representation in the genre. Actress, Octavia Spencer, made headlines when she bought out a theater in Mississippi for Black children in an underprivileged community to view the movie for free. Tampa Bay Buccaneers player, Clinton McDonald, is also hosting a free screening for kids in Central Arkansas and former National Basketball Association (NBA) player, John Best, bought out 1,980 seats in a theater in Memphis, TN, for children to see the movie.  There was also a fundraiser leading up to the release called the “Black Panther Challenge” on Go Fund Me. According to the Go Fund Me page, it was launched by New York resident, Frederick Joseph after he successfully used the site to raise $40,000 for children in Harlem to see the movie. The “Black Panther” Challenge ended up raising over $400,000. 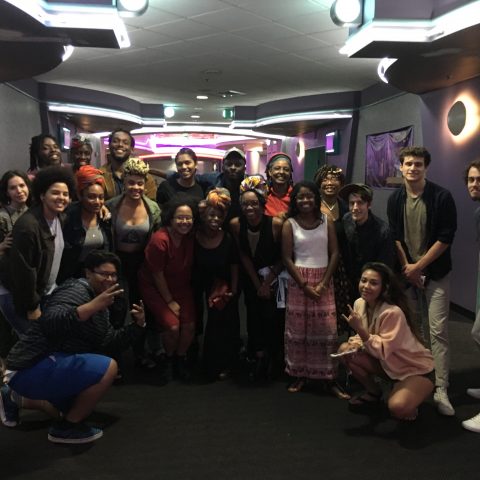 “It did not take any convincing for the Foundation to support us,” thesis student and BSU president, Paul Loriston, said of the New College Foundation in an email interview. “They were excited to be a part of the collaboration.”

Loriston emphasized that this film was significant to the BSU as a cultural happening.

“This film functions as a catalyst for young, Black folks to start conversations around race, class and gender,” thesis student and Tangent layout editor, Bree Nieves said. “Especially with BSU, and Black student unions across America being funded to go watch this film. It’s not only Black representation, but Black healing in the media, and Black coordination of resources.”