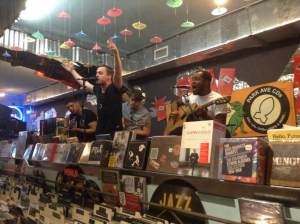 Tampa-based Set It Off performed three songs from their new album Duality at Park Avenue CDs in Orlando.

Nowadays, it is somewhat of a luxury to have an independent record shop close by. A place where you can spend afternoons sifting through shelves of CDs, gawking at unique memorabilia, spending a little more money than you should. Orlando, Florida is lucky enough to be home to Park Avenue Compact Discs. Tucked away in an unassuming strip mall, the store sells everything from vinyls to posters to tee shirts, and regularly hosts in-store appearances from numerous musicians. Just last week they had New Found Glory. Next month will feature Neck Deep. This past Wednesday, Park Avenue CDs welcomed Set It Off to celebrate the release of the band’s second album Duality.

Comprised of vocalist Cody Carson, guitarist/vocalist Dan Clermont, guitarist Zach DeWall, bassist Austin Kerr, and drummer Maxx Danziger, Set It Off hails from Clearwater, Florida. Their activity springs back to around 2008. While attending Oberlin Music Observatory and studying to be an orchestral clarinetist, Carson began posting solo covers on YouTube which, over time, attracted a steady following. After performing with scene superstars All Time Low, Carson, inspired, realized instead that was the performing career he wanted to pursue. He soon left college in Ohio, came back to the Tampa area, and laid the foundation for Set It Off.

However, Carson never abandoned his classical background. While it is tough to bottleneck Set It Off’s music into a single genre, it could be broadly defined as orchestral pop-rock. Their first full-length, Cinematics, was released in 2012. The album gracefully combines loud guitars and wailing vocals with trumpets and violas, creating a uniquely satisfying listening experience. Coupled with the extravagance of their live performances, Set It Off quickly separated themselves from other bands in the scene. While still up-and-coming, the act’s popularity grew tremendously during this time, playing Vans Warped Tour, supporting multiple other tours, and even leading a co-headliner this past summer.

Set It Off released Duality on Oct. 15, riding the wave of buzz after being named one of Alternative Press’ Most Anticipated Albums of 2014. Their sophomore effort hits the pop in pop-rock closer to home. Extracting influences from ‘90s pop and enhancing the largely sonic nature of Set It Off, the album juxtaposes catchy choruses and dark verses, exemplifying this idea of “duality,” amid of backdrop of bitingly honest lyrics.

Set It Off warned of a shift in sound before the album dropped; however, judging from the musical progression in their previous releases, it was expected. Whenever a band experiments, tries something new, does not recreate the same record over and over again, I commend them.

Freddy Marschall, a local cinematographer from Tampa who specializes in music videos, started his career working with film while in his own band that played shows alongside Set It Off. He has shot Carson’s solo covers, which the vocalist continues to post on YouTube, and has also started to partner with the band more often through promotional videos and commercials.

“All of the members of Set It Off are my good friends,” Marschall said. “They are extremely talented musicians. This next record is going to be their best record hands-down.”

Park Avenue CDs knew what they were doing. After attending my fair share of disorganized functions in similar settings, the organization of Set It Off’s album release event was refreshing. The stage was set up in the isle against the back wall, and fans stood behind the following isle full of CD displays. The band was elevated enough, so someone could watch from anywhere in the small store and still get a great view.

Underneath a ceiling of little drink umbrellas, mimicking a sky of colorful lights, Set It Off played three songs from Duality. The set started with “Tomorrow,” a track that features Jason Lancaster, the former lead singer of Florida-based Go Radio. The lyrics in the song serve as a follow-up to the anthem “Dream Catcher” on Cinematics, which is a quasi-motivational speech of sorts urging the listener to chase dreams no matter what obstacles stand in the way. It was a strong beginning to the performance, adding an air of excitement to the room.

After seeing Set It Off four times this year alone, I am fully convinced that Carson is one of the most, if not the most, genuinely passionate frontmen in the scene. Even in the casual Park Avenue CDs environment, he put on a show, animating his movements, stretching his voice, engaging his crowd. Behind Carson, the other band members reinforced the sincerity of the image, smiling and enjoying the music as much as the audience.

After “Tomorrow” came “The Haunting.” Duality’s sinister opening track begins with a cutting ballad that suddenly smashes into an energetic rant of a song, throwing out bad language and angry promises through the lyrics. Even though the set was short, the contrast between the first and the second song effectively relayed not only the diversity of Duality as an album, but also the diversity of Set It Off as a band. It was the first time the group played either of the songs live, an impressive feat considering the success of the performances.

Fittingly, the final song Set It Off played, “Why Worry,” has been the most popular so far. The multi-faceted tune has so many twists and turns it could come across disjointed; however, after a listen or two, it all eventually works.

This was when the crowd engagement reached its highest level: at one point, Carson’s microphone cut out, and the audience took over for him. The entire song was a game of give and take, as Carson sang a lyric in the chorus, he asked the room to do the same afterwards. By the time that song and the performance ended, everyone could not help but to feel pleased despite the brevity.

Underneath a ceiling of little drink umbrellas, mimicking a sky of colorful lights, Set It Off played three songs from Duality.

The evening ended with a meet and greet signing. The members lined up behind the store’s counter and fans flowed through, collecting a special poster made for the album release event at Park Avenue CDs along the way. Carson proudly proclaimed that it was in the band’s top three best in-store appearance posters. For about an hour, the members signed, talked, hugged, posed for photos, and smiled for the attendees, many of which they recognized from previous shows, a personal touch that makes all the difference.

“Thanks for being supportive,” DeWall said to the Catalyst. “Thanks for checking out the record.”

At this moment, the future of Set It Off looks promising. Duality climbed iTunes overall and alternative charts easily, and the band is just about to start the biggest tour of their career. They possess an efficacious balance of incredible talent and authentic charisma, seen with last week’s performance and signing, that should propel them straight to the spotlight of success in the near future.

Find Park Avenue CDs at http://www.parkavecds.com, with links to their social networks, directions, and online store.