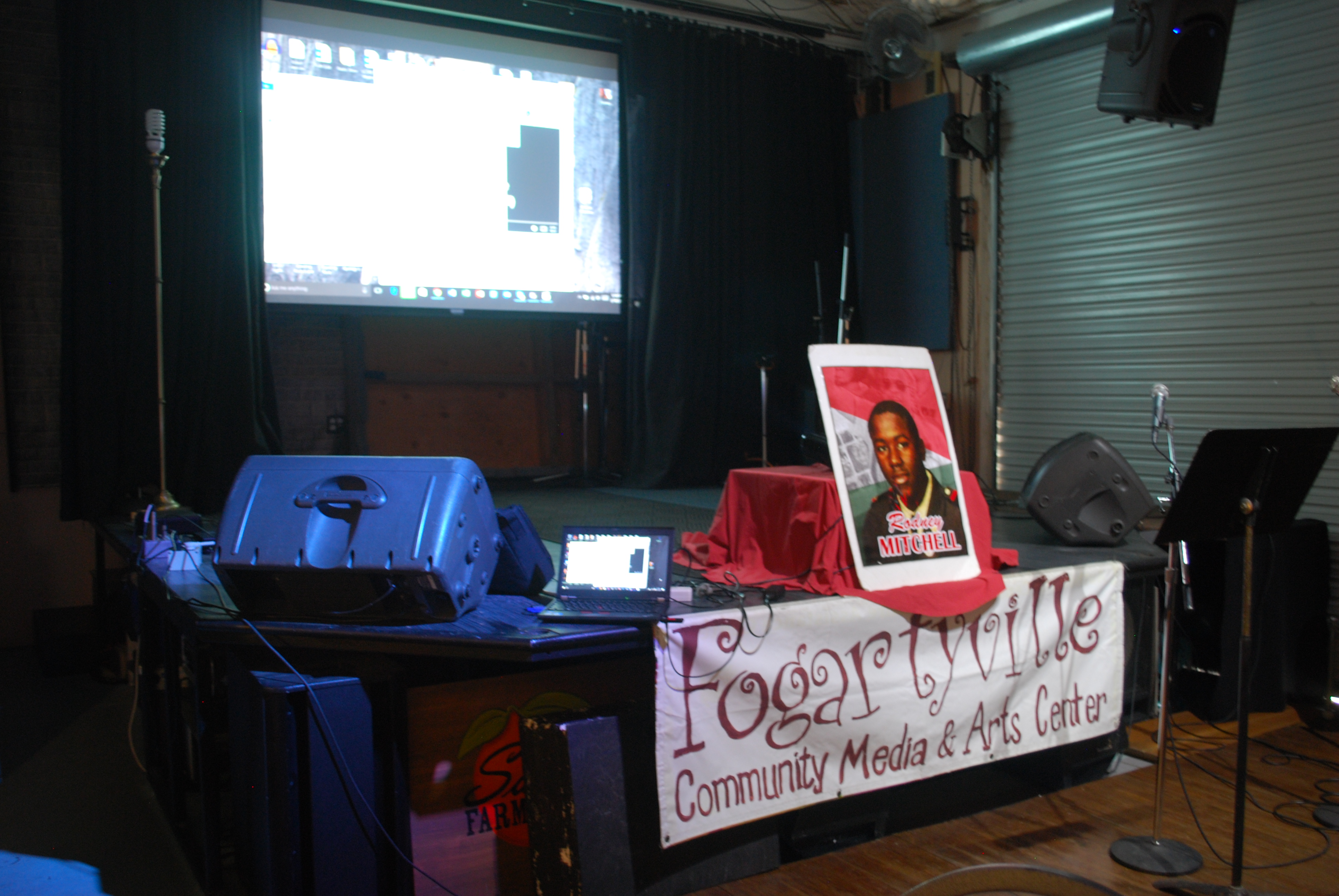 The dinner provided the first opportunity to publicly screen a documentary covering Mitchell’s death and the community’s monumental reaction to it. Photo by Kat Grimmett.

The Sarasota officers that shot Rodney Mitchell five years ago are still on duty today. A documentary screening and dinner was held at the Peace Education and Action Center this past Sunday, March 19, to celebrate Mitchell’s life and to support his mother, Natasha Clemons, in her fight through the judicial system.

Clemons has fought in the courts since Mitchell’s death in June 2012 and is now marching the case up to the Supreme Court. All proceeds from the dinner went towards paying for a lawyer qualified to represent the case at that level.

Rodney Mitchell would have turned 28 on Tuesday. The dinner and screening was co-organized by Black Lives Matter (BLM) Manasota Chapter and Answer SunCoast as part of a twice annual series of events: a vigil commemorating Mitchell’s death and a celebration in honor of his birthday.

“ANSWER has been involved right from the beginning, we’ve helped organize many protests and events around the anniversary of his death,” Ruth Beltran, a leader in the national Answer Coalition’s Suncoast chapter, said. “Now that Black Lives Matter is initiated, they have joined in supporting this cause as well.”

Beltran noted that BLM Manasota is in the process of moving meetings to Newtown to boost community involvement. Their next public meeting is to be announced.

The annual events – in addition to supporting Clemons’ ongoing legal fees – have become a beacon of light for the Newtown community and neighboring black communities in Bradenton and Palmetto.

“This event truly is for the community so we can come together, so I can show them exactly what’s really happening,” Clemons said. “Just know that we’re here for a common cause, we’re here to support each other, encourage each other, love each other.”

The dinner provided the first opportunity to publicly screen a documentary covering Mitchell’s death and the community’s monumental reaction to it. The documentary is part of a larger series put together by the Tampa Bay Times about police brutality.

“It just tells the truth, it states the facts,” Clemons said. “It shows to the world that Rodney was innocent. It’s different when you show people the evidence base and the documentary did that.”

The screening showed footage of the many protests seeking justice for Mitchell and interviewed Clemons from the very beginning and through the years that followed.

“It’s a very, very scary situation to get pulled over and not know if you’re going to live,” Clemons said in the documentary, which ended with a note that the Sarasota Police Department refused to comment.

Rodney Mitchell was pulled over in Newtown for allegedly not wearing his seatbelt. It was found that Mitchell was – in fact – wearing a seatbelt. But instead of releasing him, officer Adam Shaw radioed officer Troy Sasse for backup and proceeded to question Mitchell and his 16-year-old cousin, Dorian Gilmer.

A California-based crime scene analyst hired to investigate the scene found that Mitchell had turned the wheel to the right to avoid hitting officer Sasse, who was approaching the front of the vehicle.

Sarasota Sheriff’s policies restrict deputies from firing at fleeing cars, protocol is simply to record the vehicle’s tag number. But deputies in Sarasota are allowed to use deadly force – even against drivers – in situations they perceive to be life-threatening.

“We don’t shoot at moving vehicles, we shoot at threats,” Sheriff Tom Knight told the Sarasota Herald-Tribune shortly after the two officers were cleared to return to work. “Our policies are consistent with most other agencies’ policies.”

New York Police Department officers are entirely restricted from shooting at a moving vehicle, the only exception being if a driver or passenger has fired shots first.

“They took his life because they knew they could do it and get away with it,” Clemons said.

Rodney Mitchell loved football. He was a quarterback at New Mexico Military College and when he received a scholarship to Eastern New Mexico University he played quarterback for the Greyhounds. When he graduated with his Bachelor degree in 2012, he moved back to Manatee to start a teaching career.

After a short history of police forces in the U.S., leading up to examples of today’s mass arrests and violence, Beltran concluded that “the murder of Rodney Mitchell can not be seen as an individual issue but a systemic one.”

“Justice for Rodney means freedom and dignity for Newtown and for black and brown communities around the world.”

A community panel of leaders from Black Lives Matter Manasota and Answer SunCoast took the stage to discuss issues relevant to Newtown and plan how to move forward as a community. Deidra Larkin, who grew up in Newtown, facilitated the discussion.

“It’s our job to keep our kids educated,” Cruz said. “We have to teach our own history to our kids – it’s not in those books!”

The panel addressed difficult questions: what needs to be done to hold police accountable, how the black community can balance individual and communal responsibility and the multitude of different ways anyone can get involved in activism.

“All the talk we’re doing, we need to put action behind it. We can agree to disagree, as long as we’re talking. We’ll be having these discussions more,” Clemons promised.