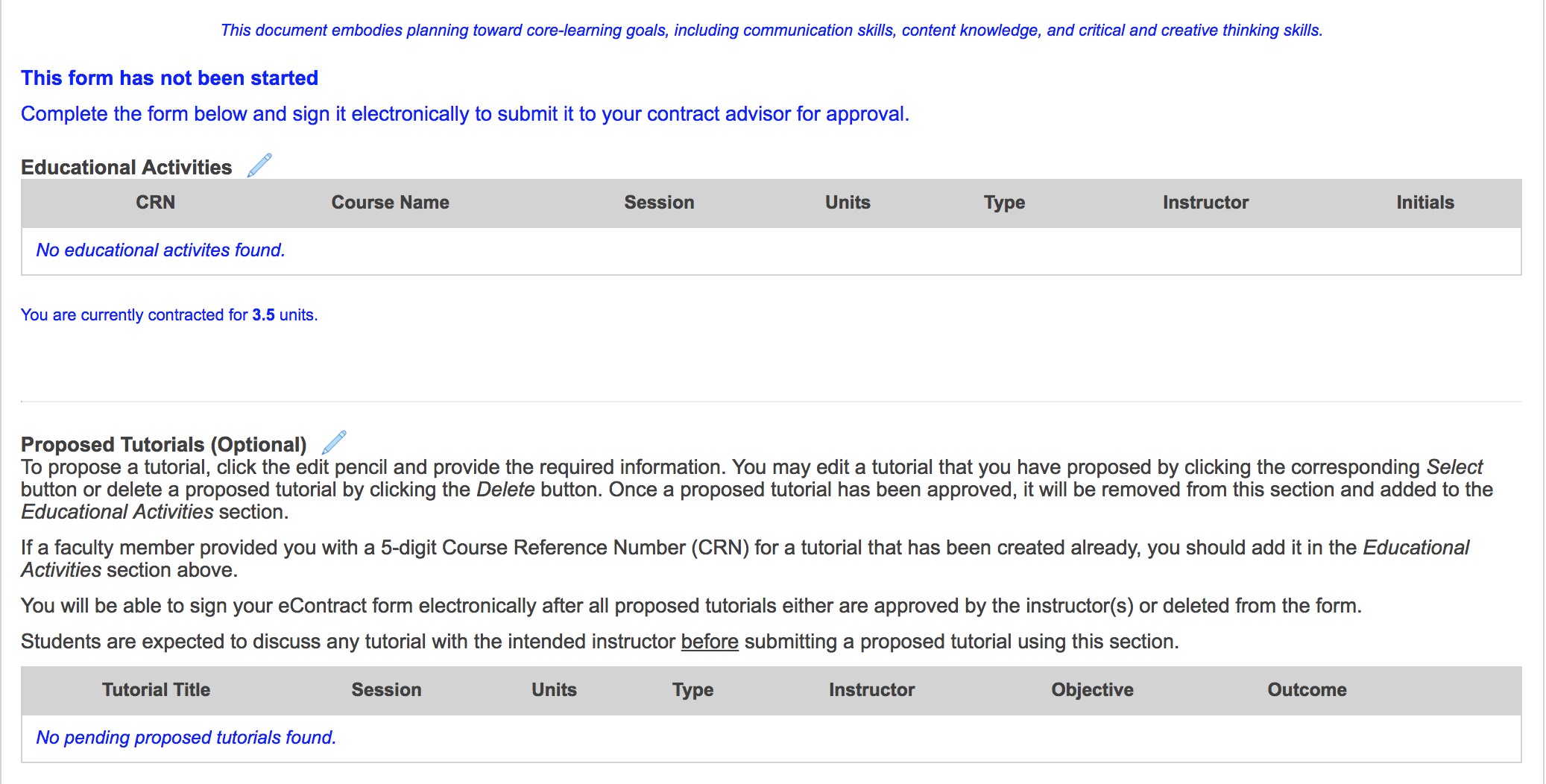 First piloted in the fall semester of 2018 by seven professors and their advisees, e-contracts fully replaced New College’s previous paper contract system the following spring. The campus seemingly did just fine with the change.

“I thought it actually went really smoothly, everyone got things to me in a timely manner,” Professor of Anthropology Uzi Baram said. “Information popped up as it needed to in email and on the page. It all fits what we have talked about in previous semesters.”

Baram said the e-contract was a good solution to the time management issues that would come up with paper contracts.

“What’s nice about the e-contracts is that students don’t need to rush to find me to get a physical signature and don’t have to rush to hand it in by 5 o’clock on that second Wednesday,” Baram said.

“I definitely put it off to the last minute,” second-year Anna Lynn Winfrey said. “There wasn’t any way I could have gotten my advisor to sign it at 2 a.m. on Tuesday morning when I actually sent it in, so I guess that was more convenient for me.”

Winfrey was among the students who first piloted the e-contract system with her contract sponsor, Professor of Classics Carl Shaw.

“Initially I was a little skeptical about them,” Winfrey said. “I’m pretty satisfied with them [but] I feel like we lost a personal touch.”

There was some concern that e-contracts would detract from or hinder in-person meetings when the system was first announced. Baram does not find this to be an issue.

“I’m very comfortable interacting on email and other forms, and I don’t think that is an artificial conversation,” Baram said. “The piece of paper was never the basis of my face to face interactions with my advisees.”

Faculty members cannot edit the contents of the e-contracts. They can only choose to electronically sign it or not.

“We decided that because the contract was an agreement between the student and the faculty member, and because it would be very difficult to modify the system as it currently exists, that the preference would be to completely have the student fill out their e-contract,” Registrar Brian Scholten said. “And then that would be a static document that the faculty sponsor would review. If they wanted to have the student make changes before they approve it, then they would have to communicate that to the student.”

Scholten also discussed the potential futures for this online system.

“Eventually we would like the whole registration process, and things that are associated with it, to be part of the e-contract system, even if we change the name of it,” Scholten said, referring to registration documents. “The plan is, sometime in the future, to make the [Prospective Area of Concentration] PAOC and the Thesis Prospectus forms electronic documents.”

More short term goals include e-contracts for study abroad students, who mailed in paper contracts rather than having the e-contract system available to them this semester, improving the functionality for professors by allowing them to create and propose tutorials in the system and adding a “submit” button in place of the e-signature.

Thesis student Eva Ernst would have preferred a submit button to the e-signature.

“I filled out my contract completely and just forgot to scroll down and electronically sign it before the deadline, I then got kicked off of Canvas for all my classes without warning and received a letter in the mail saying I was no longer registered at New College,” Ernst said in an email interview. “So I had to call the Registrar’s office and they sent me a form to petition the Provost. They also said I would have to pay a $50 late fee. I was told that the fee would most likely be waived due to this being a technical issue though.”

Scholten said that the e-signature was redundant because one has to verify themselves to access the Student Evaluation System (SES) with their myNCF login. Ernst agrees that a “submit” button would be more intuitive.

“If they would have found a way to have a “submit” button, that would have cleared things up very quickly,” Ernst said. “That way, students have to scroll all the way to the bottom and make sure they filled everything out before leaving it for approval. As it is now, you just fill out the contract and save it on your SES account. Getting some sort of notification that the deadline is coming up and something hasn’t been filled out would also be helpful.”

Winfrey also had thoughts on improvements for the system.

“I wish they would do some more improvements where you didn’t have to go back and look for the idiosyncratic [Course Request Number] CRN,” Winfrey said, referring to the need for students to open the class schedule separately in order to fill out their e-contracts.

Scholten explained that CRNs are needed as independent identifiers for courses each time they are offered for the Banner system used to keep track of student records, so streamlining this may not be straightforward right away.

“[The contract is] just like another thing I’m sending off into the ether, but I feel like it’s not that big of a deal compared to other large changes [at the college],” Winfrey said.