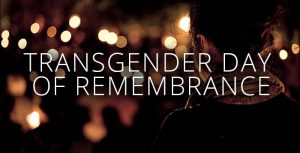 For nearly 20 years, Nov. 20 has marked the Transgender Day of Remembrance. What began as a way to memorialize the death of transwoman Rita Hester, who was murdered in 1998, has grown into a national movement to shine a light on the violence the transgender community still faces today.

New College of Florida’s TParty, a student-driven club dedicated to trans issues, organized a candlelight vigil by the bayside of campus to honor the more than two dozen victims in the United States who were murdered for being transgender. ALSO Youth, a local LGBTQIA+ rights group, also held a candlelight vigil at their office located only three miles away from New College’s campus.

“In 2017, advocates tracked at least 23 deaths of transgender people in the United States due to fatal violence, the most ever recorded,” the Human Rights Campaign’s website said. “Some of these cases involve clear anti-transgender bias. In others, the victim’s transgender status may have put them at risk in other ways, such as forcing them into homelessness.

“While the details of these cases differ, it is clear that fatal violence disproportionately affects transgender women of color, and that the intersections of racism, sexism, homophobia and transphobia conspire to deprive them of employment, housing, healthcare and other necessities, barriers that make them vulnerable.”

On average, one to two have been killed somewhere in the U.S. every week, and experts say these numbers understate the problem.

“We know transgender murders are underreported,” Nathan Bruemmer, Executive Director of ALSO Youth, said. “We know they’re harder to solve because often police departments or local communities misgender the victims. We know there are murders happening that we don’t know are of members of the transgender community because their families or police departments or communities don’t acknowledge it.”

“Murder is the ultimate violence because it’s final,” Bruemmer said. “But there’s a lot of other violence that the transgender community faces on a day-to-day basis. As far as we know we have not lost someone due to murder for being transgender in this community, but I know we have transgender members who have been dehumanized, who have lost jobs and apartments. For our youth in the public school system it might be not being called by their name or treated as their gender. Murder is the worst case scenario, the worst of the hatred, but there’s an array of violence and none of it is okay.”

ALSO Youth’s candlelight vigil was preceded by a slideshow displaying the names of the victims as well as photos of them and some information about their lives.

“We tried to find pictures that showed who they were with smiles and joy because when you’re young that’s what your face should be filled with,” Bruemmer said. “Each of the pictures showed us somebody who had a full life–although some were much younger and so they hadn’t had a very long life–but their smiles told us they had friends and family and happiness and that’s what we honor.”

The New York City Anti-Violence Project has recorded “a spike in incidents of hate violence” against the greater LGBTQ community since the 2016 presidential election. Advocates say the increase in violence is inseparable from the social climate, like so-called bathroom bills, which aim to police who may use gender-specific public facilities.

Organizations like ALSO Youth combat this culture of violence by providing “peer support services, educational programs, advocacy, and referrals for gay, lesbian, bisexual, transgender, intersex, and questioning youth ages 13 to 21,” according to their website.

What can you do to counteract anti-trans violence? Bruemmer says the best thing you can do is become a committed ally.

“Educate yourself,” Bruemmer said. “You can do it online. You can contact local organizations like ALSO Youth – we’d be happy to educate you. The next step is to realize you’re going to make mistakes and that’s okay. You might misgender somebody. You might use the wrong language. Just apologize and learn from your mistakes. That’s huge. You also need to make sure you are elevating the folks you are standing up for and not talking over them. There’s a difference. The trans community needs allies. We had a bunch of allies tonight, so I’m excited.”

“We had members of the church community here, folks that just saw the news story that came who I had never met before, we had our youth and their parents here, members of the transgender community, members of the ALSO Board, New College students–an array of all the different parts that make Sarasota great,” Bruemmer continued. “It’s not about politics or religion. It’s not about a generational divide. It’s about our humanity and it’s the right thing to do. We have to keep fighting and moving the needle because lives are depending on it. Next year we’ll do this again, hopefully it will be a shorter list and we’ll have more members of the community here and we’ll keep doing it every year we need to do it.”