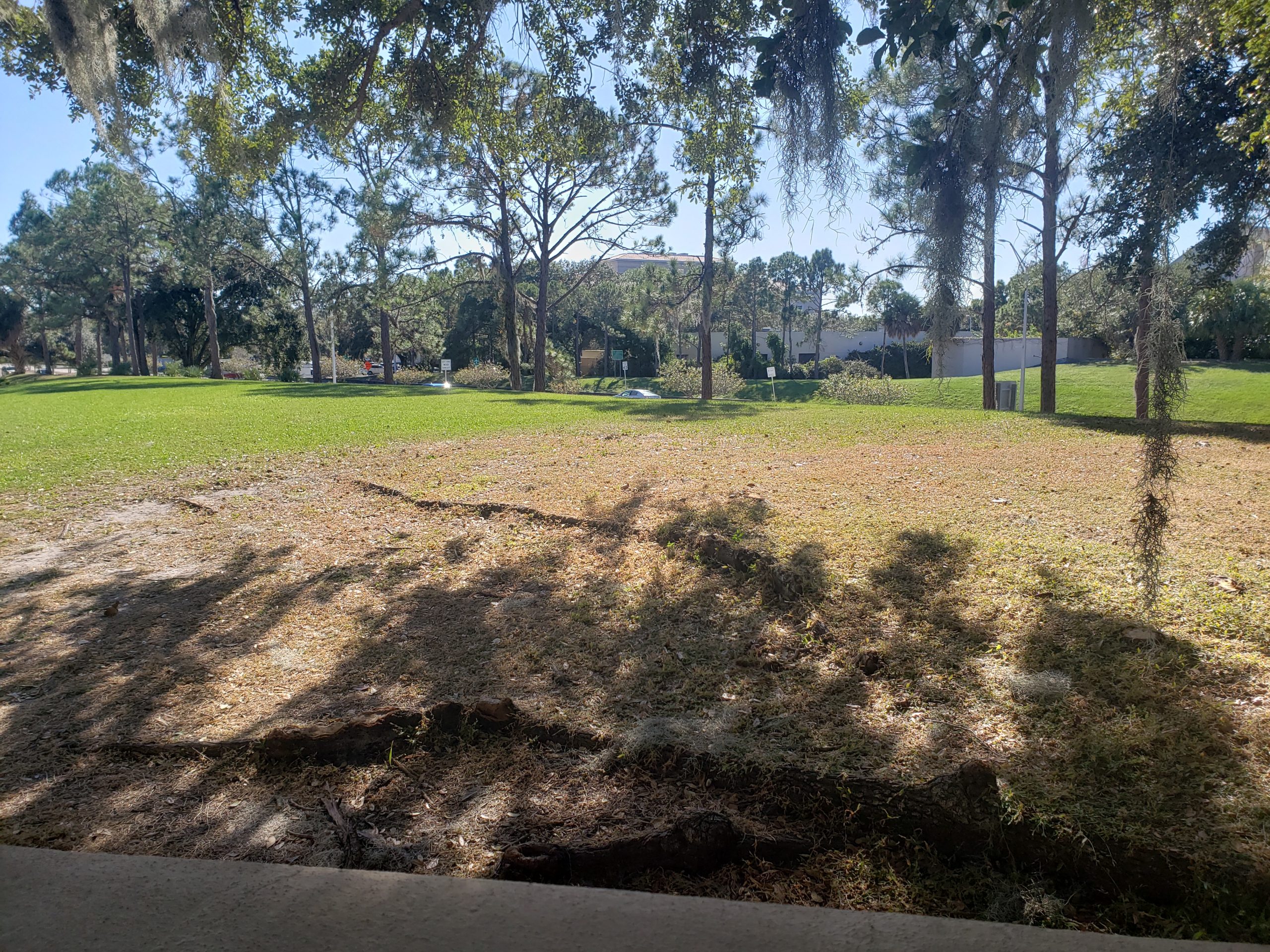 A swath of dead grass surrounding the trees near Z Dorm, as seen from the overpass.

The latter half of this fall semester can be characterized by increased scrutiny from both students and school employees alike of the Physical Plant for the use of Roundup on campus, a chemical known for containing glyphosate which was declared a probable carcinogen by the World Health Organization (WHO) in 2015. Notably, Roundup has been found to have been sprayed in areas that students regularly frequent—sometimes barefoot—without any signage. This knowledge came to light following both a student protest and the testimony of one employee, whose name has been withheld for their protection. In response, the Landscape and Signage Sub-Committee, comprised of various student, faculty and staff representatives met on Nov. 15 and reached an agreement: Roundup will not be used on campus for the next three months, while a second committee, the Glyphosate Reduction Task Force, works to build an argument to eliminate Roundup use at New College entirely.

Vice President for Finance and Administration Chris Kinsley—who attended this meeting and announced this on Nov. 19 in an “From the Desk of Chris Kinsley” email—said that the three-month ban informally began following the student protest outside of College Hall on Oct. 15 out of “an abundance of caution while we waited to see what the outcome of the meeting would be.”

The ban will last until the next Landscape and Signage Sub-Committee meeting in February. This ban affects only the use of Roundup during this three-month duration, not pesticides in general. Kinsley also reaffirmed that Grounds Coordinator Ken Harris is the only person on campus licensed to use Roundup.

Co-Vice President of Green Affairs and third-year London Weier said that 45 minutes out of the hour and a half meeting was dedicated to discussing Roundup, and highlighted a proposal organized by Garden Coordinator and second-year Lillian “Lily” Field, arguing against the use of Roundup. Field was an active participant in the Oct. 15 student protest.

“One of the first times that I had a student bring it up to me, it was Lillian Field,” Weier said. “She was super concerned about Roundup because she actually saw Ken Harris spraying it on campus and was made very uncomfortable by it.”

Field’s proposal included information from a study conducted in Sri Lanka which found that glyphosate contributes to kidney disease and destroys renal tissues. The proposal also included statistics on each place that glyphosate is banned or restricted globally, in a list that spans Africa, Asia, Oceania, Europe and some regions of the Americas.

“This isn’t a product that is widely used and widely accepted,” Weier continued. “If anything, culturally, we’re leaning more towards a point where countries are not accepting the use of this anymore.”

Weier also elaborated on the lasting effects of Roundup use, citing a study Field used which states that glyphosate has been found in major waterways across the U.S. and in about 70% of rainfall samples.

“One of the issues of Roundup is that it doesn’t just disintegrate and leave the environment,” Weier said. “Especially because we’re right on the bay, we’re going to be getting a lot of rainfall that then goes into ditches and drainage and ultimately that is going to end up in our bay. And glyphosate has actually been found in rainfall samples. So, there’s evidence of this cycling through the environment. It’s not something that breaks down quickly.”

Furthermore, Weier said that Roundup use poses a health concern for students, considering that many walk barefoot across campus, have dogs that they bring out to grassy areas or otherwise hold events or relax in outdoor areas.

“There’s just a lot of risk for exposure for students whenever it’s sprayed in our environment, and whenever you think about the campus as our backyard,” Weier said. “I think that’s what we want to get through to the Landscape Committee is that, of course this is state property and of course this is something that has to be managed, but at the same time, this is student living quarters.”

In preparation for the February meeting, Weier said that herself, Co-Vice President of Green Affairs and third-year Zane Cullinane Walsh and New College Student Alliance (NCSA) President and third-year Sofia Lombardi are putting together the students they want to include in the Glyphosate Reduction Task Force.

“But students are welcome to reach out to us and consult with us, and if they want to have their opinions heard and they’re not on the committee, then they can always reach out to Zane and myself and we will make sure to directly transfer anything they want to say to that committee,” Weier explained.

In the meantime, Weier emphasized the distinction between advocating for Roundup reduction and Roundup elimination on campus. Whereas she said that she felt spokespeople for the Physical Plant are in favor of reduction, “what we’re trying to bring to the table as student representatives is the fact that students don’t want it reduced, we want it gone.”

“Part of the reasoning is the ease of maintenance,” Weier said, commenting on the reasoning behind Roundup reduction instead of elimination. “Oftentimes, they’ll cite the safety of their workers whenever they’re trying to clear out weeds. Let’s say it’s in a ditch, they don’t want them to be using dangerous materials or fall in. And also, it takes the workload off of them, of not having to meticulously weed. And something that students have brought up as well is that in certain areas, why does it need to be perfectly landscaped? Why can’t there be some weeds around the base of a tree in Rural America? Because that’s where you’re seeing a lot of it, is them spraying it around the bases of trees.”

Kinsley also offered some insight into the reduction versus elimination of Roundup, stating that it still has uses when it comes to removing invasive species of plants that cannot be effectively removed by hand—such as torpedo grass in the Wildlife Restoration Area.

“There may be select areas where there’s consensus that limited use of Roundup might be the best solution,” Kinsley said. “It’s a balance. That’s one of the things that was clear at the committee meeting, that we recognize that there’s opportunities to reduce, and if it’s possible, to eliminate Roundup, but we don’t want to introduce solutions or chemicals that are more toxic. That’s the last thing we want to do.”

More decisive change will be made early in the spring semester, but until then, Weier encourages students who want to get involved to contact her or Walsh, as well as to attend Council of Green Affairs (CGA) meetings to have their voices heard. Kinsley also said that he appreciates student involvement in this process, and is hopeful that a solution will be reached.

“I just really appreciate the students to whom this is a concern,” Kinsley said. “That they’re willing to sit down and take the extra step of some of them being on the sub-committee to really study the issue at depth, and work with administration at developing solutions that will be practical, as well as realize that we don’t want to have a solution that causes even greater problems.”