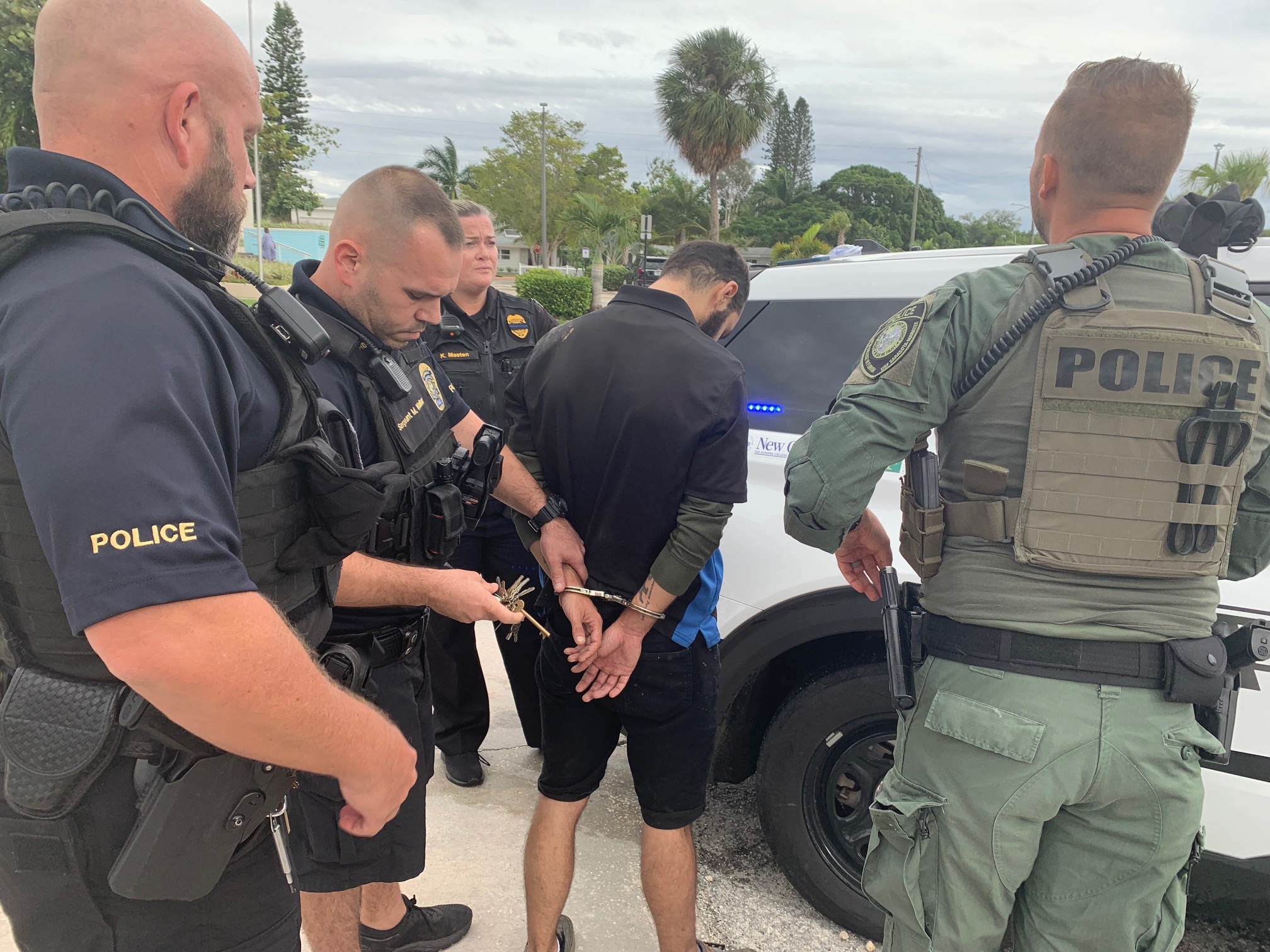 A photo of Jon Cannon being arrested outside of his workplace on Oct. 28. Photo courtesy of CPD Captain Vacca.

On Oct. 28, the Campus Police Department (CPD) released an alert of a burglary arrest case of Jon Cannon at 5:05 p.m. earlier that day. Cannon was arrested by the CPD and the Holmes Beach Police Department at his workplace after a warrant for his arrest was filed by New College Acting Sergeant and Lead Investigator John Chirgwin. After a two-month long investigation, this arrest was made following several intrusions at Dort and Gold residence hall that have been haunting New College for over a year. However, as of Oct. 30, Cannon has been released from custody after posting a bond of an unknown amount. With the investigation still ongoing and Cannon released until he is meant to appear in court, it is uncertain what the future holds for this case, and for New College security and surveillance going forward.

The CPD has worked alongside the Manatee County Sheriff’s office and the Sarasota County Sheriff’s office throughout the investigation. CPD members were present during Cannon’s arrest—including Captain Kathleen Vacca, Sergeant Kelley Masten and Officer Ryan Welch, with Welch transporting Cannon to Manatee County jail. However, Holmes Beach officers were the ones to enter Cannon’s workplace of Domino’s Pizza at 5606 Marina Drive and formally arrest him, since the location was under their jurisdiction.

Vacca said that the investigation came together over the course of two months through the many tips the CPD received and by combing through hundreds of hours worth of surveillance footage.

“We went back to the time and the date that the incident was reported, which was Aug. 25 at approximately 4:08 a.m.,” Vacca explained. “There’s not a lot of pedestrian traffic, or for that matter, vehicle traffic, and so we went back to that general area and looked at pathways that a person departing from there would have taken. We had images on the video of the person, and we saw the person lingering for some period of time prior to the incident. We tried to extrapolate from there how they would leave the campus and where they might go, and began to use video from other places.”

Vacca confirmed that the 12-second clip released by the CPD on Sept. 3 of a man walking along the overpass near Z Dorm was, in fact, Cannon.

Masten elaborated that footage used for the investigation came from a variety of sources, “Zone 1”—or areas nearby the residential halls—being the primary on-campus source.

“We have cameras which are pretty visible on the residential side, in the parking lot, for example, behind the Hamilton Center,” Masten said. “There’s one that gives us an angle of General Twinning Blvd., which is really good because we can get cars coming and going for the most part. We use that camera a lot for bike thefts. We also have parking lot cameras right on General Spaatz, that will face the Sudakoff lot and the Shell lot.”

Masten also explained that other surveillance used for this case included street cameras outside of campus, as well as footage caught by nearby businesses and other police departments.

Both Vacca and Masten advocated for more video surveillance “on the exterior of residential areas,” citing the role that surveillance footage played in forming this investigation and determining the suspect.

“Generally speaking, video surveillance is what ultimately assisted us with being able to get this investigation going,” Masten said. “If we can get more cameras throughout the campus, especially in the residential areas, that’s just huge to me because when people call and they want to report, either a crime or their bike being stolen, the first thing we do after taking that report is we fall back to video surveillance.”

“Should there be a very serious and violent encounter, chances are, based on past history, that these things will occur in places like cafeterias, in Human Resources with disgruntled employees, in residential areas and in large gathering places like conference halls,” Vacca continued. “In that group are residences, and student residences make them a particular target. The police here at New College aren’t worried about a student stumbling into their room at 3 a.m., perhaps intoxicated. We’re concerned about the people that have no business here but only wish to victimize our students or our community.”

In light of this arrest, a handful of students on the student forum looked into Cannon further—and learned that he has a history of very similar offenses at Rider University and The College of New Jersey as early as 2015. Public record shows that Cannon has been convicted of at least four counts of burglary, trespassing and resisting arrest in New Jersey. According to Masten, he was sent to prison in Aug. 2017 for an 18-month term. Cannon was then briefly paroled in 2018, only to return to the state prison system later the same month after being charged with stalking.

“It’s also alleged that he did commit a similar crime at the University of Wyoming, and he does have a current active warrant for that crime, which is still alleged,” Masten mentioned. “However, their evidence is through DNA.”

Perhaps most troubling is how Cannon initially went through a pretrial program (PTI) after his first offense at Rider University, which called for “three years of supervision and conditions of gaining and maintaining employment.” When asked how these sort of repeat offenses are able to occur, spanning both years and state lines, Vacca explained that sexual offenders have a high recidivism rate, and that with or without treatment, it is not uncommon for them to re-offend.

“Jon Cannon does have a history, and as you can see,” Vacca said. “And while the arrest warrant originally signed by a judge said no bond, within days he was released on bond.”

A bond—similar but not interchangeable with a bail—is a sum of money posted in order to ensure a defendant’s release as they await trial. According to Masten, he was released on “the highest intensity of supervision.”

“Bond is not meant to be a punitive measure, it’s meant to reassure that the person will show up in court,” Vacca said. “But clearly, having a sex offender out means that, potentially tonight, he could re-offend and there is not monitoring. He could be anywhere, but that’s the system that we have, and so we will do everything within our power lawfully to protect the campus, the students, the faculty, the staff and our visitors.”

While he is out on bond, Cannon is barred from coming onto campus. Cannon’s sentencing now ultimately lies in the hands of the state attorney’s office, the prosecuting office and the local court system. Cannon has no trial date at the time of this article’s publication.

However, this case is still active and whether it becomes inactive or formally closed will depend on the final findings. Public record documents will continue to be provided as the case continues, likely through the Sarasota County Clerk said Masten.

“Maybe they’ll have motions or appeals or that sort of thing, but he will be ultimately given a trial date and we’ll see what happens then,” Vacca said. “We will simply share the information in our incident reports. We have over 94 reports so far that have to deal with this incident, by just about everyone who works here on different shifts. I want to commend the people who work here as well as our community, our students, staff and faculty who have called with concerns and provided information.”