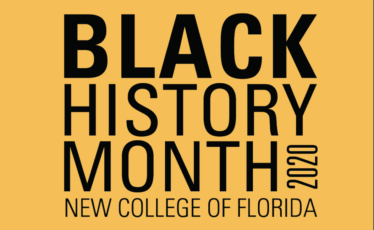 Out of the students interviewed, each had a different relationship with Black History Month. Third-year Co-president of the Black Student Union Jasmyne Prophet remembers their first introduction to Black History Month in grade school and how different it was compared to their experiences on campus.

“Throughout grade school when we would talk about Black History Month, we would learn the standards, talking about Dr. Martin Luther King Jr’s “I Have a Dream” speech and it was all [simplified],” Prophet said. “Black History Month at New College was really when that shift in understanding Black history and Black culture happened.”

Prophet also mentioned the Sur la Bay Festival and its importance to their understanding of Black Arts.

“It features predominantly Black and LatinX artists,” Prophet said. “Those styles of music and artistic expression were things I was raised around, even though I was raised by a Black mom. Still, that disconnect that I felt in the beginning isn’t really as present now. If anything, I feel more connected to my heritage and feel more connected to things that I wish I had been exposed to earlier on.”

The experience of third-year Rolando Tate was, in his own words, unique. Born and raised in Carol City, a predominantly African populated county, Tate counted himself lucky.

“My parents are very, very racially conscious and educated, thankfully, but because of all that, I never really feel like I developed a sense of entitlement to my own races,” Tate said. “I feel like I really belong to any one thing, an almost part-time struggle with that a lot and that just becomes even more muddy when it comes to the celebration of life.”

Tate spent the majority of his grade school years in a magnet school.

“They always found different ways to appreciate people or at least make us socially conscious,” Tate said. “We had food festivals, where they would have our families come to school and have them cook and share food with everyone. They were intentional about informing us about not just our history but the importance of our identity.”

“On [each Island] we have Carnival, which is a representation of African cultures,” Dinang said. “We have a bunch of events all year. Music, bands, food and parties.”

Since coming to Sarasota, Dinang felt that the main message of Black History Month has been lost in the goal of trying to share the voices of prominent historical figures, not individuals in the Black community celebrating their own voice and culture.

Dinang said, “Our shared history, that’s the past, we can’t change it. The only thing we could do is move forward, move forward and share what makes us as a community great.”