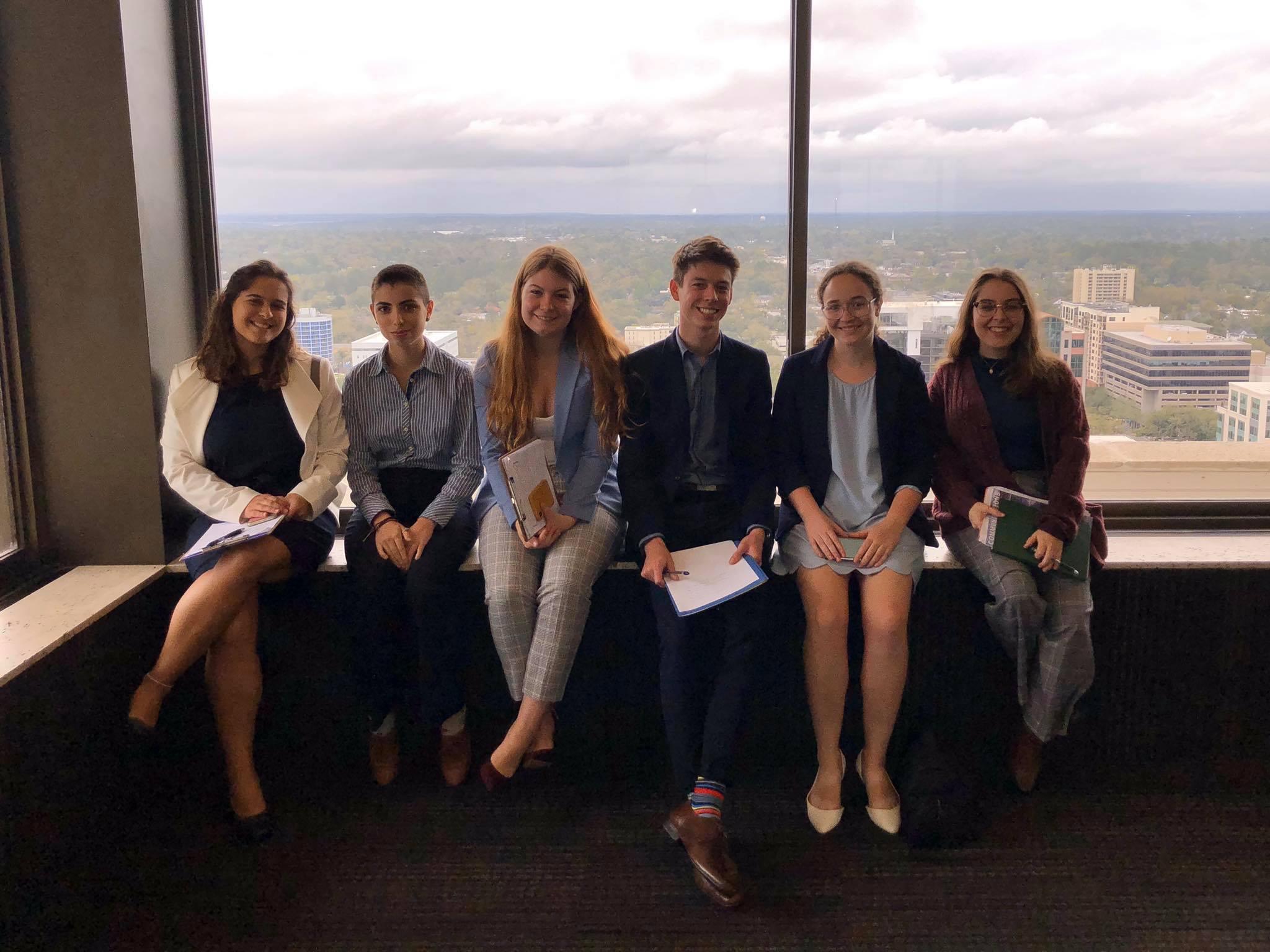 Despite the lack of support from New College’s professional lobbyists, a small group of students traveled to Tallahassee on Tuesday, Feb. 25 to meet with legislators and testify at the House Appropriations Committee against a bill that would merge New College and Florida Polytechnic University with the University of Florida (UF). The bill’s sponsor, Rep. Randy Fine, was the only person that spoke in favor of House Bill (HB) 7087, which passed the committee on a nearly party-line vote.

The bill is scheduled for a vote on the House floor on Friday, March 6 and is expected to pass. No Senate companion bill has been filed but Senate President Bill Galvano, a Republican from Bradenton, has said that he is open to discussing the bill. However, Sen. Joe Gruters, another Republican whose district includes New College, has publicly stated that he will oppose the merger bill. Gruters is also the chairman of the Florida Republican Party.

Until the evening of Feb. 10, HB 7087 was unknown to the public, university leaders and fellow legislators. The bill was first heard by the House Education Committee on Feb. 12, where it passed 12-6.

In the past three weeks, students have been organizing to preserve New College’s independence. Second-year and Vice President of New College Democrats Ellie Young hosted a phone banking session on Feb. 11, and thesis student Alex Barbat, along with others, organized a rally on ACE Plaza on Feb. 20, which was covered by local news outlets.

First-year Sofia Lombardi, along with Young, worked to organize a bus to the House Appropriations Committee on Feb. 25. Approximately 100 students signed up at the rally. Lombardi is also a Catalyst staff writer and an intern on Rep. Margaret Good’s congressional campaign against Vern Buchanan.

Lombardi coordinated with Good’s legislative staff at the capitol and Interim Dean of Student Affairs Randy Harrell, who declined to comment for this article, to acquire funding for the trip from the New College Foundation and coordinate logistics.

The trip would have cost approximately $2,800. MaryAnne Young, the executive director of the Foundation, said that the money was sourced from a small budget of unrestricted funds for unexpected needs. But the day after the rally, Lombardi found out that the funding for the trip had been revoked.

“In consultation with our lobbyists, the senior administration made the decision to cancel the student bus trip once it became apparent that the House Appropriations Committee was not going to be a receptive audience,” Director of Communications and Marketing Ann Comer-Woods said.

Other public universities in Florida also have their own lobbyists. Since New College is so small, it outsources legislative influencing to a firm, Capital City Consulting.

Nick Iarossi and Chris Schoonover are two lobbyists working on HB 7087. When asked why the larger bus was cancelled, Iarossi and Schoonover both said that larger groups are less effective than meeting with individual legislators.

“I never think it’s a good idea to flood a legislative committee room with a bunch of people,” Iarossi explained via email. “It tends to be a waste of time and money because not all of them can testify and it cuts the testimony of each individual short.”

Although funding for the larger group was cut, Lombardi and Young collaborated with alumna Wesley Beggs (‘10) to raise funding for a smaller group to go.

On Monday, Feb. 24, the day before the committee, Lombardi said that she got a phone call from Schoonover.

“The phone call was very brief, but he strongly warned me against going to testify,” Lombardi said. “He told me that it would be a ‘shit show’ if we went and testified. I explained that I respected his professional opinion, but we were still going to go up and testify.”

“I do not recall saying what Miss Lombardi alleges,” Schoonover said in response to Lombardi’s allegation. “We gave our recommendation based on our experience for the reasons I outlined and told them we understood their decision to testify if they still chose to do so.”

Iarossi, the other lobbyist from Capital City Consulting, said, “I did not tell anyone whether they should or should not testify.”

Lombardi said Schoonover’s phone call was slightly unsettling, but she still knew she wanted to go.

“I wasn’t going to throw away a whole trip I had organized,” Lombardi said, “and I knew that it was the right thing to do because every stage of this is critical.”

Lombardi filed a verbal complaint with the Dean of Student Affairs, Randy Harrell, about the phone call with Schoonover on Feb. 28.

Five students, along with Professor of Computer Science Matthew Lepinski and alumna Wesley Beggs (‘10), left Sarasota before the sun rose on Feb. 25. Before the House Appropriations Committee convened at 3:30 p.m. students met with Reps. Carlos Guillermo Smith and Evan Jenne, both Democrats on the committee, who gave advice about testifying and discussed why they would be voting against the bill.

“Focus on what the stakes are and how bad the process is and how awesome New College is,” Smith said. “It needs to remain an independent institution.”

He also encouraged students to use social media to share the day’s events.

“One of the problems we have in Tallahassee is we’re not in the spotlight, like people in Congress are,” Smith said. “Put it out [on social media] because that might be the only way some folks back home see what terrible things are happening here in Tallahassee in this committee today.”

Rep. Evan Jenne also said he did not support the bill and had prepared many questions for Fine.

“I would consider New College to be on par with any Ivy League school in the nation,” Jenne said. “To me, that’s something that you have to protect.”

The House Appropriations Committee was scheduled to last from 3:30 p.m. to 6:00 p.m. but was extended in half-hour increments to 8:00 p.m.The merger bill was the second-to-last item on the agenda and was not discussed until after 6:30.

Before the public testimony period, Fine fielded questions from other representatives.

“Do we have the right as a state to tell [students] where they have to go?” Rep. Barbara Watson, a Miami Democrat, asked.

Fine replied that because the legislature created the schools, they have the authority to merge them.

Rep. Smith asked how the merger would affect current students and which school would be written on the diploma.

Fine replied that if a student graduated before the merger was finalized, their diploma would say the existing school. But after the merger would be completed, “their degree would probably say the University of Florida on it.”

When Rep. Jenne asked about how many net positions would be cut and buildings shared, Fine said that it would be up to UF.

Jenne also asked, “Has the University of Florida or any other university, organization or government entity given you an analysis of the potential cost savings with this?”

Second-year Daria Paulis, who is also a Resident Advisor (RA), argued that because so many New College students live on campus, administrative costs are higher and would likely not decrease with a merger.

Ellie Young testified about her research experience with faculty and emphasized that the merger would save only 0.048% of the State University System budget.

Finally, Lombardi, who is from the Washington, D.C. metro area, talked about why she chose to come to New College to study public policy.

“New College was the only school in Florida that I applied to and I didn’t come here to end up going to the lesser version of a bigger school,” Lombardi told the committee.

After the testimony ended, the committee transitioned into debate. No representatives spoke out in favor of the bill.

Rep. Ben Diamond, a Democrat who represents St. Petersburg, emphasized that there is more to higher education issues than money.

“As we’ve heard from some of the people who drove all the way to Tallahassee to have this opportunity to speak for 20 or 30 seconds, there’s more to these issues in higher education,” Diamond said. “There’s more to the evaluation than just the cost analysis. And I think if we’re going to be talking about making major changes in our state university system, we need to be doing it in a way where we are at least providing all those that will be impacted with more meaningful opportunities to provide input.”

Other representatives, including Good, Smith and Jenne, made their cases for why the bill should not be voted for.

However, the bill passed the committee mostly along party lines, with only one Republican voting in opposition.

Many news outlets, including the Sarasota Herald Tribune, Orlando Sentinel and Florida Politics published news stories about the bill’s progression through the Florida House within a couple hours of the bill’s passing. The Herald Tribune, Tampa Bay Times and the Gainesville Sun have also published editorials opposing the merger.

President Donal O’Shea said that he appreciated the “tremendous commitment” of the people who travelled to Tallahassee in an email sent to the campus community that evening.

The legislative session is scheduled to end on March 13. In the last 10 days of the session, legislators are required to only give a 24-hour notice before a bill is heard on the floor or in a committee. Lombardi said that she is on “high alert” for the next couple days, but the future of the bill—and Florida’s two smallest public schools—remains uncertain.

“Anything can happen in this building,” Jenne said, citing previous examples of eleventh-hour changes, “and usually it’s not great.”

This story is rapidly developing. Check twitter.com/ncfcatalyst for the latest updates.