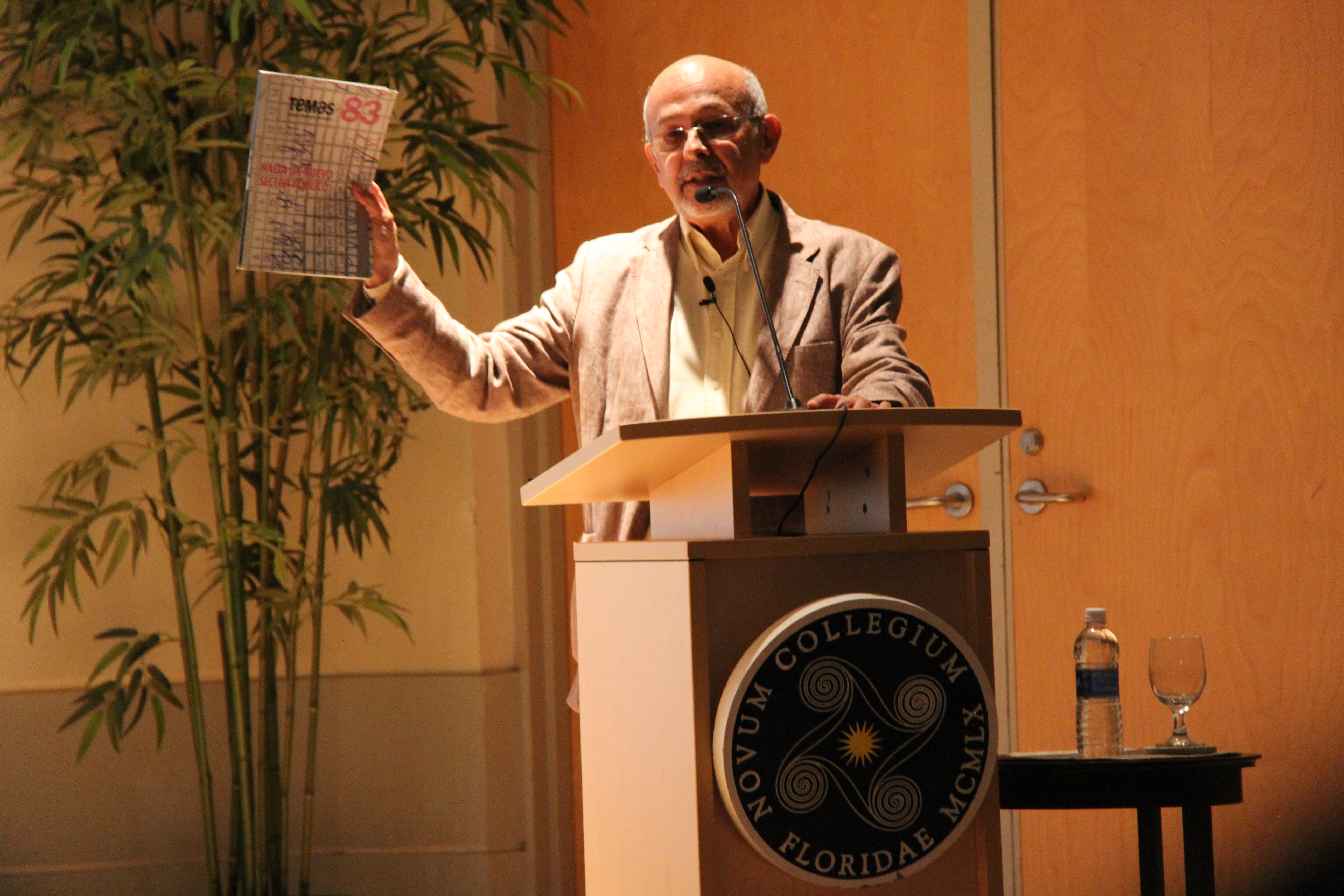 Dr. Rafael Hernández hold up a copy of Temas, a Cuban quarterly magazine.

Since diplomatic relations between the Unites States and Cuba began normalizing in June 2015, Americans and Cubans alike have wondered what the future of Cuban-American relations will look like. Dr. Rafael Hernández, a Cuban scholar whose expertise involves Cuban and U.S. culture and politics, spoke about the current stage of the ever-evolving international relations at New College of Florida’s Sainer Pavilion on April 25.

Cuban-American Catalyst reporter and layout editor, Anya Contreras-Garica, sat down with Dr. Hernández before his presentation to ask him questions about the future of relations between her two countries. Comments have been edited for length and clarity.

What inspired you to become the scholar you are today?

“I grew up in the 1950s, in a small town at the center of Cuba called Cabaiguan. My grandmother was a very respectable elementary school teacher who taught many people how to read and write, which greatly influenced my interest in education.

“After I got my BA from the University of Havana, I was offered to go to Mexico to continue my studies. I decided to focus on U.S.-Latin American relations, and was one of the founders of the Center for the Study of the Americas in Cuba. I was there for almost 20 years as the Director of U.S. Studies.

“I have always had a deep interest in learning about the U.S. because it has been a permanent factor in Cuban history for more than two centuries, especially cities in South Florida like Miami, Tampa and St. Petersburg.”

How do Cubans on the island view Cuban-American dissidents?

“I find that there is a meaningful difference between the average Cuban dissenter – any person who may have a critical view of a certain government or policy – and dissidents. What I observe among the Cuban dissidents in Miami is that many of them are very dogmatic, rigid, hard-liners.

“Reconciliation and dialogue cannot happen with people who take such an inflexible stance towards normalization. If you are so against the re-connection between the Cubans in Cuba and the Cuban diaspora in the United States, I don’t think this is a positive thing. I believe dissent is very important in any democratic political culture, but we must be able to work together.

“Another problem with Cuban-American dissidents is that they have been associated with the interests of the United States government. Even those Cubans who do not approve of Cuba’s current government and policies do not like the authoritarian stance of American policies towards Cuba.

“The conflict between the two countries is not only ideological, but it is also about a big power dominating a small nation on the border of that big power. When there was initial support for the Revolution in Cuba, many of the supporters had completely different political views. Why did they merge together into one movement? Because they had a common enemy, a common threat – the United States.

“If we want to solve the social issues that plague us, we must not allow ideology to blind us. I see no difference between a hardline Communist and a hardline dissident. They don’t want to have a dialogue. They’re not democratic.”

What do you think about many Cuban-Americans in Miami voting for Trump?

“During the campaign, Trump sent many mixed signals regarding his stance towards Cuba. But what has happened in his first 100 days? Has he rolled back any policies towards Cuba implemented during previous Presidencies? No, that has not happened.

“According to Professor Guillermo Grenier [one of the lead investigators of the Florida International University Cuba Poll], approximately 53 percent of Cuban-Americans who voted for Trump favor normalization and lifting the embargo. They separate voting for Trump and policy towards Cuba.”

Do you feel like American tourists fetishize Cuba? Are they commodifying Cuban culture at the expense of the Cuban people or are they bringing much needed capital to the island?

“What I ask my students is, ‘Do you think the Americans are going to be any worse than the Italians who come to Cuba?’ Many Europeans, Canadians, even Mexicans who come to Cuba are not the best tourists. Drug consumption and prostitution increase when tourism increases.

“The upper-middle class Americans who are coming to Cuba are fascinated by Cuba regardless of their political positions. They say, ‘I wanted to see Cuba before it changes, before there is a McDonalds on every corner.’ It is like they are having a re-encounter with the Cubans they have in their minds that they believed disappeared because of Communism.

“Tourism is the most important exchange happening between these two countries. They are coming to Havana and staying in bed-and-breakfast houses with real Cuban families. I think this is great because it’s the best way to know a country. We can learn from each other. You can visit and talk to real Cubans and listen to what their concerns and problems are. I think this is good for Cuba, good for the American tourists and good for relations between the two countries.”

Because of the double-currency system in Cuba, there is a generation of Cuban youth watching their parents and role models leave their professions as doctors and engineers to join the tourism industry as waiters and cab drivers because they will make more money. What effect do you think this will have on Cuban society?

“I think that a degree that does not equate to a salary proportional to that degree is a fundamental problem in Cuba. Nuclear physicists had to quit their jobs to work in hotels. But, you have to remember that this is not happening in a bubble. This has been going on, and the people are adjusting.

“The negative impact of this distortion, what scholars call the inversion of the income pyramid, has been very negative to all Cubans, not just young Cubans. Yet, universities are full of youth studying things that will not earn them a high salary. Perhaps some of them will join the tourism industry of leave Cuba, but many will not.”