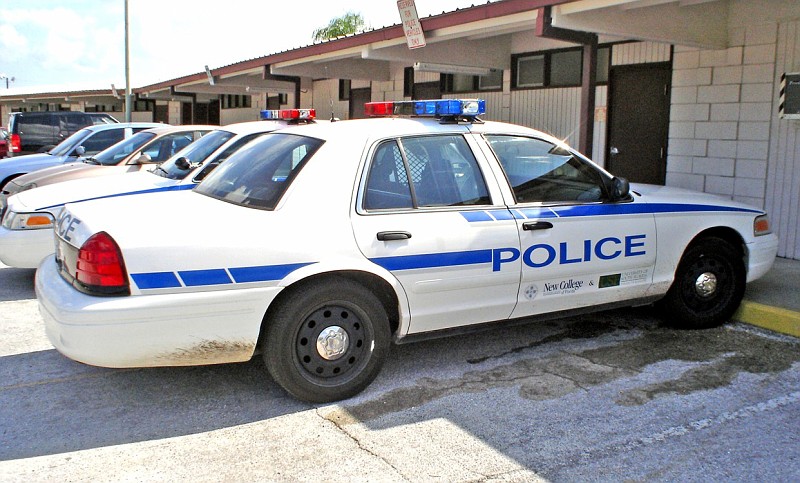 NCPD cruisers in front of the old station, which was located in the Viking Motel building. (Image courtesy of Bill Wise)

After a violent incident at a Wall between Sarasota locals and students in 2008, the administration instituted a policy requiring Walls, public school-sponsored parties, to end at 2 a.m. Students’ response to the 2 a.m. curfew was divided, but many felt that the then-Dean of Students Wendy Bashant’s administration was unwilling to approach a compromise in good faith. The Council of Student Affairs, a group organized by students to represent their stance on the curfew policy, released a report entitled White Paper on Wall Times.

“If students want our autonomy back,” the report reads, “we need to take on these issues very seriously.”

The authors of the 2008 White Paper on Wall Times understood that their negotiations with the administration were just one chapter in the history of student autonomy at New College. They concluded the report with what they called a “Lesson from the Past,” and included a brief history of major conflicts between students and the administration over Wall policy. They knew that other students before them had taken a role in creating or damaging the balance between student autonomy and the concerns of the administration. With that in mind, they marked a 1977 Halloween Palm Court Party (PCP) as a turning point.

“A total of seven noise complaints, two false alarms, significant townee problems, and a stolen Miami Herald paper rack (later dressed up, burned and placed on the diving board),” the report states regarding the events of 1977.

The campus police department (CPD), then only two years old, demanded that student government take steps to keep PCPs and Walls under control. Their methods were not effective, and the 1978 Halloween PCP had similar problems. According to the White Paper, campus police “began to assume roles in community regulation that had previously been under the autonomous control of students”

Increasingly frustrated with the inability of the student government to regulate parties and the administration’s willingness to shape student life, Student Executive Committee Chair (SEC) Larry Lewack (‘76) resigned. The position of SEC Chair was then equivalent to New College Student Alliance (NCSA) President.

“If y’all don’t care enough to fight to preserve your basic institutions, nobody is going to do it for you, and they’re going to die,” Lewack wrote in his resignation address.

However, the authors of the White Paper saw that there was another way. In 1991, students and the administration were again at loggerheads over the noisiness of campus parties and complaints from the surrounding neighborhoods. Students recognized that noise complaints were a serious issue, and that they were unlikely to agree with a solution advanced by NCF administrators. In order to tackle the problem of off-campus noise complaints, the newly formed Noise Policy Task Force tested different speaker placements and volumes levels and sent students out into the surrounding areas to record the intensity of the volume. They even went so far as to note the direction of the wind.

In spite of some resistance from administrators and campus police, the efforts of the Noise Policy Task Force paid off. Their recommendation that noise complaints be taken first to Wall-throwers and RAs, rather than campus police, was accepted by the administration after negotiations and an endorsement by the local homeowners’ association.

Conversations between students, administrators and the New College Police Department (NCPD) concerning Walls and similar events in the past four years have shown that history doesn’t repeat itself, but it does rhyme. In 2014, tensions rose after a rash of event shutdowns by the NCPD, who cited a policy that prohibited two campus events from taking place at the same time. It later became apparent that the shutdowns were the result of a short staffed police department, foreshadowing more recent issues.

“Here’s my dilemma,” Chief of Police Michael Kessie said in a 2014 Catalyst article entitled “Two events at once: a ‘consideration’ not a policy,” by Adina Luft. “I have an event at the pool and I have an event in Palm Court and I may have one or two officers working. I have the rest of the campus to cover and have to provide security for USF. So our position on this is how many events there are and where they happen, we don’t have a problem with any of it, [just] give me the adequate number of staff to provide for the safety and security of the college.”

The NCPD’s continual staffing problems have impacted the frequency of Walls significantly in the past year, prompting students to voice their concerns on the Forum about the potential loss of a treasured tradition.

“So sad to say, but it’s true. Over the years, there has been a consistent decline in not just people throwing open social events, but just being able to go out and have fun…” thesis student Jack Cox wrote on the Forum.

Police staffing is just one factor in the liveliness of New College’s student life. The ease of signing up for and organizing Walls can affect their frequency. According to a 2016 Catalyst article “Whatever happened to our Walls?” by thesis student Giulia Heyward, the Wall signup process was streamlined that year after a debate over its accessibility.

Third-year Yvenord Mergilles, whose recent Wall proposal garnered the eighth most votes in the Wall selection poll, argues that the current selection process is flawed. This Spring’s voting process required the Wall sponsors to confirm their selection and pick a date for their Wall at the NCSA office during a two-hour window. Mergilles charged that the need to confirm a Wall date in person was undemocratic.

“[The Wall selection process] privileges those without obligations (courses, employment, prior engagements, inability to attend) on an arbitrarily chosen date and time,” Mergilles wrote in the complaint. “[It] provides no clear advantages to previous methods.”

“Students have shared [anxiety about the infrequency of Walls] and I totally get that,” Tara Centeno, the director of Student Activities and Campus Engagement, said. “Now we’re getting closer to there being enough staffing to support [them.]”

“I think that in this situation our interests align,” third-year and Vice President of Student Life Timothy “Tim” Manning said when asked about talks between the NCSA and the NCPD. “The NCSA and the student body want there to be sufficient staffing so that we can have Walls, and the police want sufficient staffing so that they can have weekends [off.]”

The situation is looking up for the NCPD as some of their personnel and resource shortages have been alleviated. There are currently nine full-time officers and one part-time officer, not including Chief Kessie and Captain Kathleen Vacca. In January two new officers, Danielle Pruner and Alex Halley, were sworn in. The department is hoping to add another full-time officer in the next fiscal year and plans to purchase two new vehicles. Additionally, after a recommendation from former NCSA president Ximena Pedroza, the department is focusing on tactical communication and de-escalation training.

“I’ve always wanted to help people out, and especially after 9/11 I really wanted to help protect people, and I felt that being local would help more,” Officer Pruner said. Pruner is a native of Sarasota who is currently in field training with the NCPD after six months at Suncoast Technical College.

However, with additional police at campus events, some students have expressed discomfort with their presence. Centeno has made the NCPD aware and is meeting with students after the Valentine’s Day PCP in order to better understand their concerns and foster a dialogue.

“Students feel like the officers are hovering and kind of feel weird about that,” Centeno said. “So in one avenue, we want to continue doing that and building those connections and those relationships. And then two, recognizing where to find that sweet spot between a supportive presence whose concern is safety […] But, where’s the sweet spot where we can support that mission but don’t have to physically be 10 feet away from an event the entire time?

“So I think it’s going to have to be all us of having that conversation and really setting some standards on what works for everyone’s objectives,” Centeno continued. “What is that circumference that still provides a quick response and safety, but also so people sitting at the Bike Shoppe jamming out won’t feel like they’re under a microscope.”

For his part, Chief Kessie maintained that officers must balance where they spend their time on busy nights.

“Officers are accountable for their time,” Chief Kessie said. “They need to patrol the entire USFSM and NCF community. In the late afternoon/overnight hours, we do like them to be in the area where most of our students live and gather while still keeping an eye on USFSM. It makes sense to be where most of your citizens are. Sometimes they are in the area of a wall working on reports in the car or due to a call. I would prefer they are visible as opposed to hiding away from everyone.”

It remains to be seen how Walls and other elements of “New College culture” will evolve as current students graduate, new policies and norms are adopted and further stages of the growth plan are brought into reality.

“The school has accepted too many normies into our glorious campus,” third-year Cesar Chavez wrote on the Forum. “The party legends forged a generation ago are now long gone… it’s a damn shame.”

Information for this article provided by the NCSA Archives