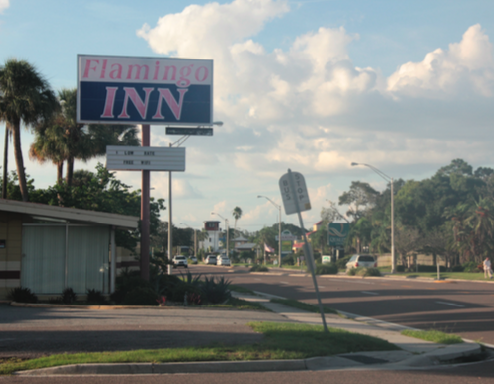 The Arts and Cultural Alliance of Sarasota County is currently campaigning funds in coordination with Minneapolis based non-profit Artspace to create affordable spaces for artists to live in work in the Sarasota area, with the historic motels along North Tamiami Trail as a potential location.

The North Trail motels, once a hot-spot of Florida tourism, declined in popularity among vacationers as I-75 was opened, replacing US-41 as the primary route between Tampa and Miami. Motels (aka “motor hotels”) became popular after WWII, local historian Jeff LaHurd told Sarasota Magazine. “It was all part of that ‘See the USA in your Chevrolet,’” LaHurd said. “[The motels] were mom-and-pop operations, with terrazzo floors and colorfully tiled bathrooms. Many had those vibrating beds—you know, you put a quarter in a machine and the bed shook up and down.”

The first motel in Sarasota was built 66 years ago, and is now the location of Chinese takeout restaurant Golden Star, an art photography space and a pornography studio.

Jim Shirley, the Executive Director of the Arts and Cultural Alliance of Sarasota County, explains that much of the North Trail now seems run-down. The Alliance, along with other local organizations, has long had an interest in doing something to revitalize the area. The North Trail Redevelopment Project was designed as the result of this, seeking ways to form “positive development” as Shirley said. “The area from about New College to Van Wezel is really the entry point into the city, if you come in from the airport, and quite honestly it has not always been the nicest looking part of our community.”

“I found that at those meetings [for the North Trail Redevelopment Project] we were always talking a lot and not really doing something. Somewhere along the way you have to start doing something,” Shirley said, explaining how the potential project with ArtSpace began to form.

According to Shirley, Sarasota is a strong candidate for a partnership with Artspace, who has developed around 40 successful artist live-work spaces since 1979. If Artspace decides to move forward in Sarasota, which is determined after an artist screening process to be undertaken after the Arts and Cultural Alliance raises $42,500 in preliminary funds, the North Trail could become the location of this type of community artist housing. While there isn’t a specific motel in mind to be renovated, Shirley believes the project would make good use of the existing structures. So far, Artspace has already toured Sarasota with the Alliance and eight meetings have been held with artists, local government, and other community stakeholders to discuss how the project will move forward. The Alliance and Artspace will be using the preliminary funds to conduct a feasibility survey of artists within a 50 mile radius gathering info on level of interest, resources, and what people are capable of paying for rent.

So far, the Arts and Cultural Alliance has raised $35,000 of the necessary $42,500. These donations have come from Sarasota government, local organizations, philanthropists and smaller individual donations. Shirley predicts that the remainder of the donations could be obtained by the end of 2016, with greater headway on the project happening by mid-2017.

Artist communities have been formed in Sarasota previously, both intentionally and organically formed. Shirley notes that there used to be an artist community around Tuttle’s Court. “It did a very good job right up until the point that it got so popular that artists couldn’t afford the live there,” said Shirley.

A relationship with Artspace ensures that this kind of pricing out doesn’t happen. ArtSpace remains partners in perpetuity with the communities it helps form and controls rent. ArtSpace would also be partially responsible for gauging which artists may have an interest in participating.

Shirley believes that this project could not only benefit Sarasota at large by revitalizing the North Trail region and fostering the arts, but benefit New College and the rest of the C4 consortium (New College, Ringling, USF-Sarasota Manatee, and Eckerd) specifically. ArtSpace residences typically include a community center for displaying art and holding events that’s open to the public. Shirley hopes this space could be used by local college students.

This all ties into a greater project among Sarasota organizations of getting younger people involved and integrated into the community and the arts, a task the Arts and Cultural Alliance has particular interest in.

“In all probability, we’ll know the recommendation by mid-2017,” Shirley said. For now, it’s a just a matter of waiting for funds.