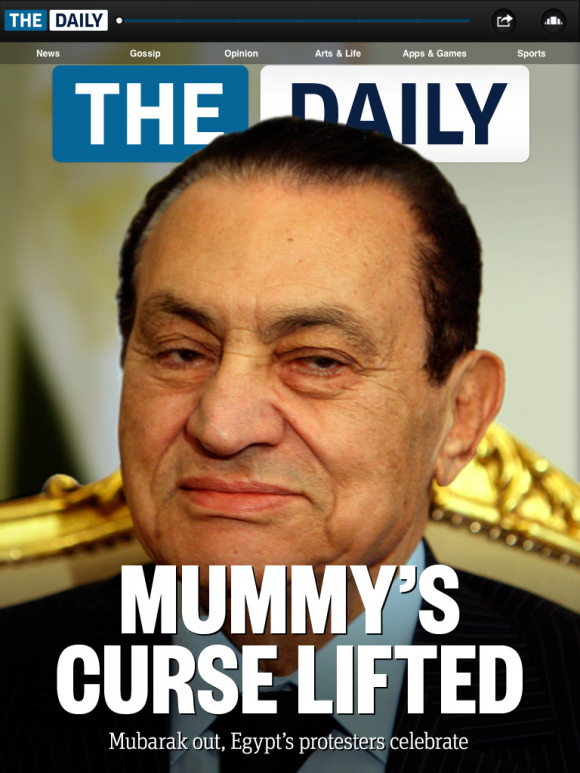 photo courtesy of the Daily

The Feb. 11 issue of The Daily was updated just minutes after Hosni Mubarak stepped down as President of Egypt.

On Feb. 2, News Corporation’s CEO Rupert Murdoch introduced the world to The Daily, the first daily national news publication built from the ground up for the iPad. “New times demand new journalism,” Murdoch said at an event held at the Solomon R. Guggenheim Museum in New York City introducing the product. “So we built The Daily completely from scratch — on the most innovative device to come about in my time — the iPad.” After six months of development and six weeks of live production, Murdoch’s play to become the leader in digital news distribution commenced.

When users first open The Daily, they’re greeted with a messaging alerting them that “A new issue of The Daily is being delivered.” After a few seconds, The Daily’s main screen — a carousel of news stories complete with custom layouts, navigable by touch — appears. Stories are separated into six categories: news, gossip, opinion, arts and life, apps and games & sports.

While thumbing through the pages of a dead-tree version newspaper or magazine may be more comfortable, The Daily is a manageable read. Its layout more closely resembles that of a magazine than a newspaper employing the use of stunning images and unique story layouts. With the iPad, a creative layout with original images isn’t the limit. The Daily combines content and presentation with 360-degree photographs, videos, animated graphs, interactive polls and Twitter streams, delivering content in a fresh new way.

In terms of layout, The Daily does everything its competitors don’t. Although the Wall Street Journal (also owned by Murdoch) and The New York Times deliver the news in a solid fashion with their iPad apps, they are stale and unappealing in comparison to The Daily. The ability to custom tailor the layout, presentation and media used in each story is what truly makes The Daily stand out.

The editorial staff guiding The Daily’s content is made up of an all-star cast including former MTV, Time, Wired, Forbes, The New York Times, AOL and News Corp.’s New York Post staff. With over 100 staffers, The Daily delivers an average of 100 pages of content a day. Peppered with a handful exclusives, The Daily offers a fairly good range of topics, especially considering that it costs users only $0.99 a week or $39.99 a year. Subscribers to The Daily will have their iTunes account charged for the cost of subscription.

In addition to an initial investment of $30 million by News Corp., The Daily is estimated to have weekly operating costs around $500,000. With an estimated 15 million iPads sold in 2010, The Daily needs to only reach three percent of iPad owners to break even. News Corp. hopes to generate the bulk of revenue from subscribers, but will also depend on advertisers to help cover the gap. Currently, The Daily is available for free for its first two weeks of existence thanks to a sponsorship by Verizon Wireless. Interactive — and surprisingly non-overbearing — ads from Land Rover, Pepsi, Virgin Atlantic and Verizon featuring video are interspersed in between stories.

Despite its forward looking strategy and presentation, The Daily is currently limiting itself to publishing, as its name implies, daily, with exception to only breaking news. When Hosni Mubarak stepped down from his post as president of Egypt on Feb. 11, those already browsing The Daily were alerted with a ticker update across their screen and a story downloaded with full details. While The Daily does have the ability to update at any time, it’s likely that News Corp. is limiting the undertaking to make sure it stays a manageable, and more importantly, profitable venture. However, more frequent updates could be in store as The Daily’s staff grows.

After having two weeks to take The Daily on a test drive, the Catalyst thinks it’s done a lot right, but it won’t make the case for most to cancel their subscriptions to printed periodicals and pick up an iPad. Although its fate rests on more than snappy layout, for design alone, The Daily should be lauded — it has set the standard against which all digital news publications will be judged against.

Forbes and ABC News were used as sources for this week’s Tech Talk.