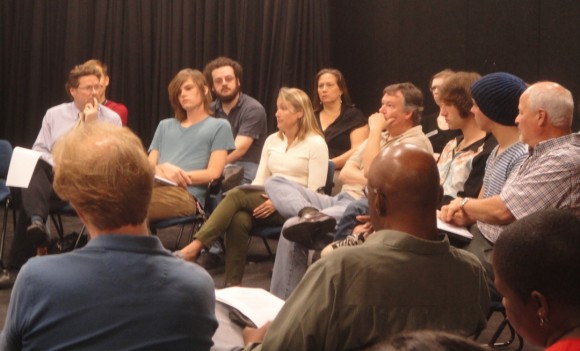 Attendees openly share their opinions and questions at the follow-up meeting.

The follow-up discussion to the teach-in about discrimination and diversity at New College took place on March 2 in the Black Box Theater. Students, faculty and staff were all invited to attend and the meeting was scheduled at a time that would be most convenient for all groups.

“What we’re doing is to follow-up on the teach-in to finish the part of it that was always intended to be part of [the teach in],” Provost Stephen Miles said.

A team of students and staff categorized the ideas on how to improve diversity at New College that participants at the teach-in had written on index cards. Based on those categories, the follow-up comprised of five major points of discussion: regular diversity programming; staff responsibility to provide programs and respond to diversity incidents; the student code of conduct and an anti-discrimination policy; diversity in the NCF curriculum; and ways to increase student and faculty diversity. Participants at the follow-up received handouts that showed these topics and where links to those points could be found in the Academic Master Plan (AMP).
“When the community was developing the AMP, we set forth these goals and so there are correspondences [to the points of discussion]” Miles said. “That should strengthen our resolve to act because these things are grounded in the planning that this community has already engaged in.”

At the follow-up, each topic was introduced with context to explain what has already been done in each of the categories, followed by a discussion of ways to improve. On diversity programming, Professor of Philosophy Aron Edidin suggested bringing back diversity circles, regular meetings to promote discussion about diversity, while Professor of English Miriam Wallace recommended reminding the campus of the history of the Gender and Diversity Center. For staff responsibility, many participants echoed the need for an ombudsperson.

“An ombudsperson is somebody who is affiliated with the campus but isn’t employed by the institution,” thesis student Destiny Lyals, one of the teach-in organizers, explained. “It’s an outside person from the community whose job it is to come in and be the diversity person on campus …. I think it’s important to have one because they can bring in a different perspective on how to handle things rather than how it is done now.”

A recurring theme at the follow-up was the need for dissemination of information to the community, as many participants were not aware of what resources the college does have to confront discrimination. Director of Human Resources Mark Levenson explained to the group that HR holds annual discrimination and harassment seminars and that sensitivity training for faculty and staff does occur. After a few faculty members expressed their frustrations at not knowing who to report to if they witness acts of discrimination, thesis student Arthur Krieger pointed out that any member of the community can anonymously file a discrimination report to the student court.

“Student court is really powerful as a way of … bringing people together to get real about problems and almost no one uses it for this purpose,” Krieger said. “People associate it with the rules, the law, but … one of its main purposes is mediating student to student conflict, so anytime someone does anything that’s offensive to you as a New College student, you can file a complaint in the student court drop box in [Hamilton Center] and student court reviews it.” Though not a member of student court himself, Krieger has been in contact with third-year and prior student court member Lucas Ballestin and the two held a meeting during the Valentine’s Day Palm Court Party to explain to students how to utilize student court to handle discrimination.

Professor of English Robert Zamsky introduced the topic of diversity in the curriculum, explaining that the Educational Policy Committee, which he chairs, has student, faculty and staff representatives and is currently working on incorporating diversity requirements. Wallace noted that New College does not offer an ethnic studies Area of Concentration (AOC) and that gender studies remains a slash AOC.

For the last point of discussion, Associate Dean of Enrollment Services Sonia Wu provided context on methods to increase diversity at NCF. “One of the ways that we work to expand our pool of applicants is by buying names from different sources, like the College Board,” Wu wrote in an email to the Catalyst. “We are working on membership in an organization that helps talented students of color enter strong college [preparatory] programs; this will identify more students for us to recruit … Plus, a special residency category gives us the flexibility to assign Florida tuition to students from Latin America and the Caribbean, so our multicultural recruiter does some recruitment in Puerto Rico.”

After the discussion points, participants at the follow-up were given clickers to respond to a series of questions regarding their priorities and suggested time line for actions to create a more accepting campus community. Actions that the majority of attendees responded to as having “great potential” to alleviate discrimination included diversity discussions during orientation, annual diversity teach-ins and a new staff position for diversity programming. While over half the participants agreed that most of the proposed actions could reasonably take place during the 2012-2014 academic years, 75 per cent responded that greater moderation of the Forum should begin this semester.

According to Miles, the next phase in the discussion on diversity and discrimination has not yet been planned. “We don’t have to control that whole process,” Miles said. “We can disseminate to the campus community what took place at this meeting, what were the results of the clickers [and then] we can see what emerges and decide on the next step.”