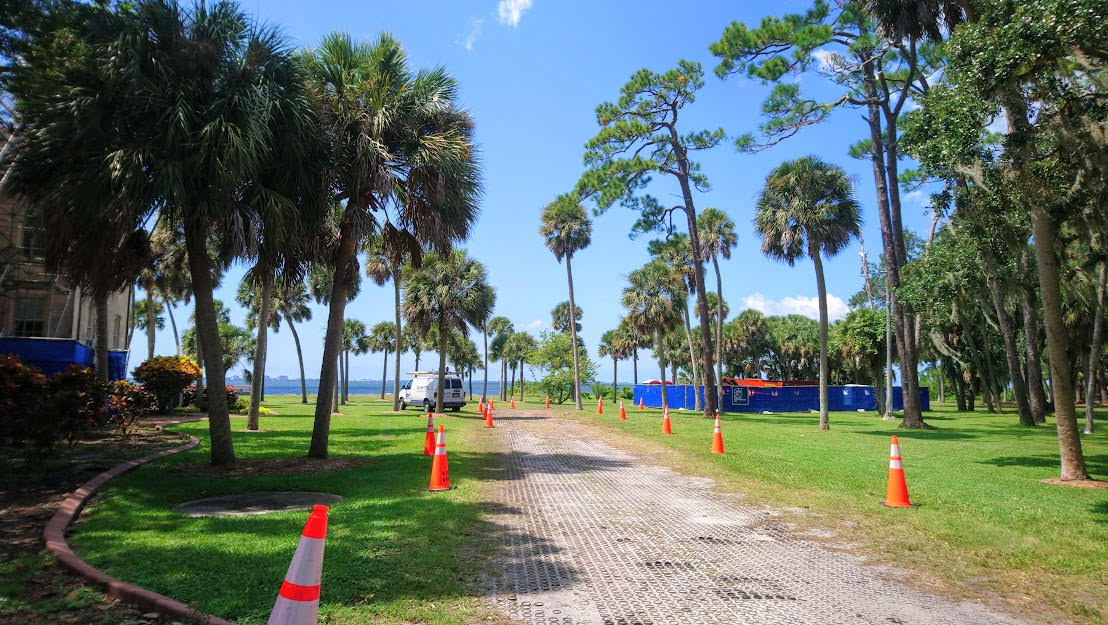 Students and faculty working in College Hall have felt the strong physical and auditory presence of the renovations on the roof, but louder construction has been moved outside of normal business hours to reduce impact. The project is expected to be completed by the end of November.

Charles Ringling built the then-unnamed 19,000 square foot mansion completed in March 1926. Ringling lived in the house for only nine months before dying of a cerebral hemorrhage, but his wife, Edith, lived there until she died in 1953.

The owner of the Sarasota Kennel Club, the greyhound race track, purchased the property and 30 acres from the Ringling children in 1958. The property was sold to another buyer before it was sold to New College for $4 million in 1962. The mansion was the library for the college but reached capacity in 1975; the Jane Bancroft Cook library opened ten years later.

The roof was last replaced in 2004. The previous roof was made of a modified bitumen membrane, which has a typical lifespan of 10 to 15 years in Florida.

Alan Burr, director of facilities and construction, noted that salty air from the bay expedited the degradation of the roofing material.

“The old roofing material was getting very dried out and cracking, causing many leaks that had become too difficult to repair,” Burr wrote in an email interview.

“We wanted to do this as soon as we could. It’s based off of when we got approval to use the funding.”

The new roof material is 80-mil thermoplastic polyolefin (TPO) membrane, a single-ply sheet with layers. First used in automotive manufacturing in the 1980s, TPO was first adopted for flat roofs in 1989 and has been growing in popularity since. TPO is relatively inexpensive, easy to install and resistant to degradation from ultraviolet radiation but is amenable to cracking and accelerated weathering in high heat climates.

Approximately $600,000 was approved for the project at the June 8 Board of Trustees (BoT) meeting. Burr said the money came from the budget carried forward from last year.

“The school gets an allocation of operating money from the legislature every year and if you don’t use it all in the year that you’re allocated it, you can use it in upcoming years,” Burr explained.

After finalizing the contractor and agreements with the vendors over the summer, the project started on Monday, Aug. 19. Burr said the project should be completed by Thanksgiving.

The contractor for the project is Creative Contractors, Inc., based in Clearwater, FL. Burr said that Creative Contractors has previously worked with the college on remodels in Robertson Hall and installing glass doors in the Center for Employment and Opportunity conference room.

At the start of the project, construction work occurred during normal business hours. After about a week, the work shifted to nights and evenings to reduce the impact on students and faculty.

Third-year Annabelle Wilson discussed the effects of the unwelcome commotion on her class.

“I have class on the second floor of College Hall and there have been times when class was disrupted because the professor had to stop speaking because the drilling was so loud and distracting that we couldn’t even hear each other,” Wilson recalled.

Professor of Anthropology Erin Dean wrote in an email interview that the construction became less disruptive after the first week of classes.

“The first week was very noisy, but now they seem to be taking extra care to work in the early mornings and evenings to minimize the noise and disturbance during class times,” Dean said.

Although the scaffolding is set up right outside of Dean’s window, she found a simple solution to deal with the issue.

“After a few moments of looking at each other awkwardly or trying to ignore it as people went up and down, I just closed the blinds,” Dean wrote.

Professor of Anthropology Uzi Baram noted the professionalism of the construction crew and recalled when the project manager helped him with a ceiling leak in his office in College Hall.

“After the work began on the roof, the manager of the project came by my office and after we chatted for a bit, I pointed out the leak (he saw the water dripping down),” Baram wrote in an email interview. “By the next day the problem was found and fixed; I could remove the garbage pail from the top of the book shelf.”

A variety of other projects are in the works along the bayfront. At College Hall, the bay-facing patio on the second floor will be renovated next summer.

“That will have to be timed more carefully because it impacts graduation and we don’t want that,” Burr said. “So, it will probably start immediately after graduation and we’ll try to get done as much as we can during the summer.”

Other renovations are in store at the Caples campus. Burr discussed a project for a new bathroom at the carriage house that will be accessible 24 hours a day with encoded cards for students, faculty or staff working at the waterfront or Food Forest.

A mold mitigation process is also underway at Caples mansion. Until the mold is removed, nobody is allowed inside. Burr did not know when the project will be complete and the mansion re-opened but the design process is underway and should be done by the end of 2019.

“We’ll get that bid out to the construction manager and we’ll see where that cost comes in,” Burr said. “[Then] they will see what resources they have to fund that.”