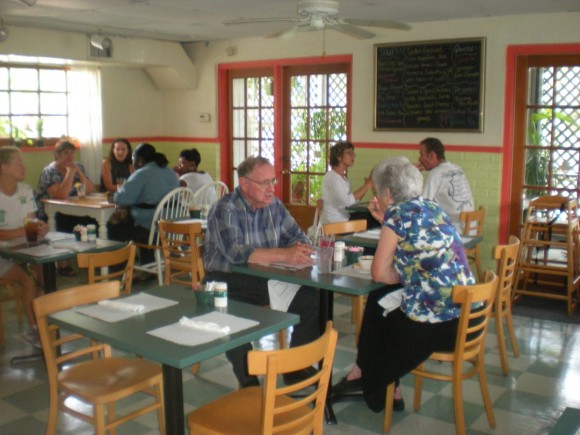 Carr said that many of her clientele are professors and professionals.

Carr’s Corner Cafe has a quaint, laid-back atmosphere that reminds me of my Aunt Betty-Jean’s kitchen in rural West Virginia. Flora and fauna filter light through the windows of the restaurant and local art is displayed on the walls. It has green and white checkered floors and a secluded, thicketed porch for outdoor seating.

Sharon Carr, the owner of Carr’s, insists upon buying local food for the restaurant. She buys produce from Worden Frams in Punta Gorda, Sun Coast Food Alliance, the Boys and Girls Club and a children’s garden in the Orange Blossom Community Garden.

This attitude towards healthy, mindful eating can be felt throughout her menu, which consists of soups, salads and sandwiches. The most popular item at Carr’s is the reuben sandwich. I tried the vegan version with tempeh instead of corned beef, vegan cheese and avocado and mustard instead of Thousand Island Dressing. It was delicious and I felt energized after eating it. The marbled rye bread was crunchy and buttery, and the avocado offered a pleasing balance to the tempeh.

Carr offers many vegan and vegetarian alternatives. She said that she would incorporate more vegan items into the menu if she had more vegan customers and noted that most of her soups start out vegan. Second-year and vegan Dan Monhollon ordered the mushroom bisque soup, which was tasty and filling. I tend to shy away from mushrooms, but I could have dined upon a whole vat of that soup. I ordered the vegan vegetable soup which was very flavorful. Other specials of the day included: quiche lorraine; spinach, feta and tomato quiche; black-eyed pea and chicken gumbo; grilled eggplant, fresh mozzarella, pesto, balsamic onions and tomato pressed on ciabatta; and sweet and spicy chicken with walnuts, fresh peaches, goat cheese and onions over organic greens.

Carr’s 82-year-old mother bakes all the deserts for the restaurant and is the cashier. “She’s very good at pies,” Carr said. “Blueberry pie is one of her specialties — key lime pie too. They are not vegan, but they are quite tasty.” I was very tempted to order the brownie a la modé which was one of the dessert specials when I visited Carr’s. My mouth is watering thinking about that home-crafted dessert.

Carr plans to make some changes to her Cafe in the coming year. “I would like to get juicing in here and smoothies,” she said. “I’d like to really up what we are doing. We are not doing breakfast — I hope to be doing breakfast by the time the [tourist] season starts. It would be limited with some healthier options.”

She hopes to make a website for the restaurant. “I’m trying to get someone to help me with that,” she stated. “They have to be hungry — I like trading.”

“I really like to show that a small business can use the model of local food and recycle,” she reflected. “I really like to do that. I really want to be a community place where people are comfortable, you know students and elderly people together.”

After my visit to Carr’s, I plan on frequenting the restaurant which is in biking distance from New College. The food was tasty and healthy and the atmosphere was soothing. Carr said that she is a fan of the New College community and hung out at New College when she was in high school. She has also employed many New College students over the years.