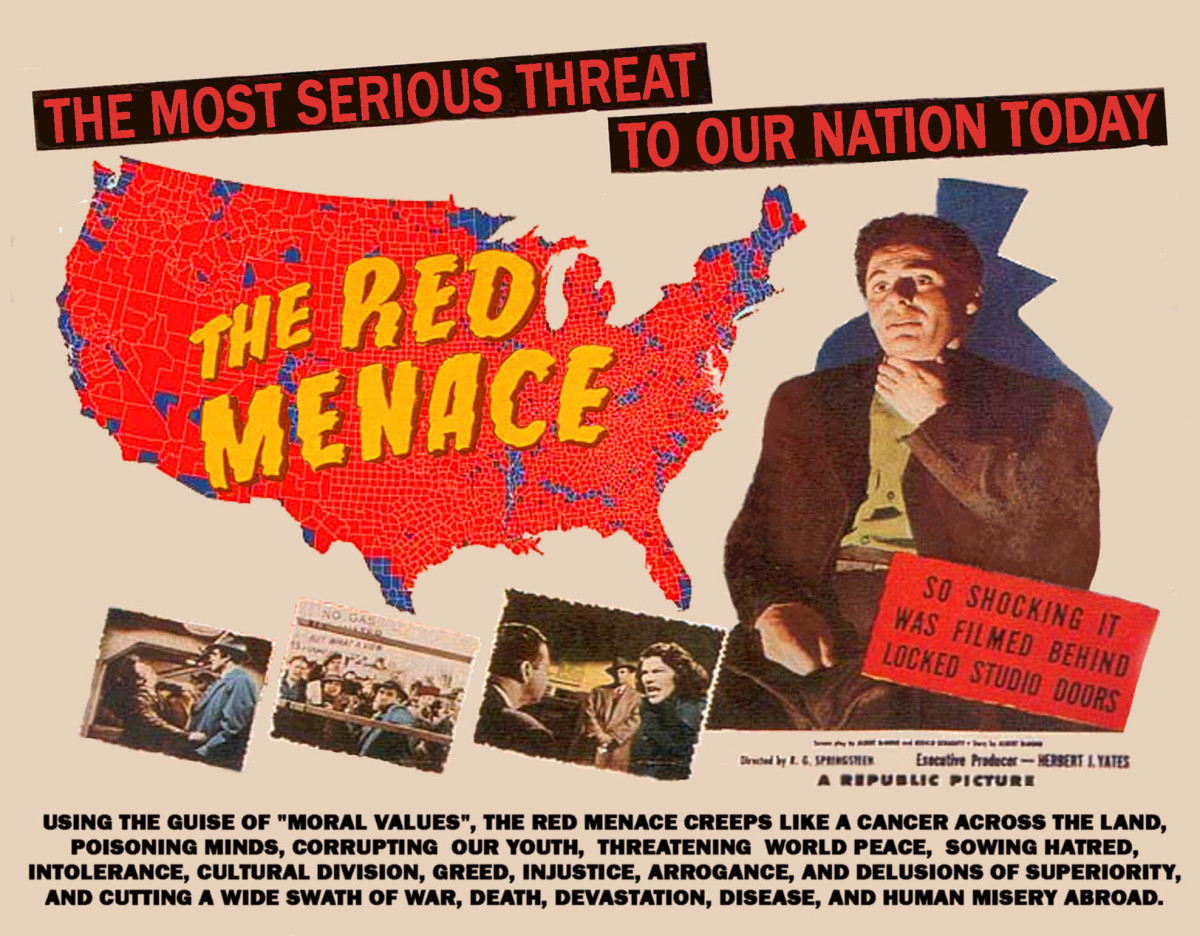 An altered image of an anti-Russian movie poster. Photo courtesy of history.com.

In the United States, we ever so proudly laud our achievements with civil liberties. Guarantees to the freedom of press, speech and equality of treatment are our blood-bone. The very fabric of democratized society is stone carved and enameled upon unalienable rights. Yet, as the third wave of McCarthyite Russophobia quietly sweeps the country following the Ukraine crisis, one is reminded amidst the jingoistic saber-rattling and dissent-crushing censorship that our rights often exist on the razor’s edge.

Moving in lockstep with the North Atlantic Treaty Organization (NATO), Silicon Valley tech companies such as Google, Facebook and Twitter have taken to removing access to Russian affiliated news and implemented sweeping policies dedicated to censoring social media. Senators have been accused of treasonous speech and disloyalty for holding views counter to prevailing state department narratives. Classical composer Tchaikovsky’s works are being pulled from concerts. Dostoyevsky’s writings, such as the iconic Notes From The Underground, Crime and Punishment, are being removed from college curricula. Russian restaurants are being vandalized and flooded with negative reviews. In a move reminiscent of hamburgers being rebranded “liberty sandwiches,” Hooters has even patriotically announced its Moscow Mule drink to be renamed “American Owl.”

“Socialists, anti-imperialists, anti-war activists, Black radicals and other independent alternative voices who challenge mainstream media and its political culture are being explicitly targeted in this censorship campaign akin to the McCarthy era,” Erica Caines wrote in an article for the Black Agenda Report.

Among the platforms removed from the web, RT America stands as one of the more tragic losses, with its entire digital archive now purged from YouTube. While EU officials portrayed the news network as a propaganda racket for the Russian state prior to its banning, the network aired an array of perspectives, many often criticizing the Russian government. Further, it was one of the last havens where Americans could air anti-imperialist voices without reprisal.

“If anybody actually watched RT America, you would have seen viewpoints that were all over the map,” former host of Redacted Tonight Lee Camp said in an interview. “Chris Hedges was a Pulitzer Prize-winning correspondent for the New York Times for ten years. Then he was basically forced out for coming out against the Iraq war. Jessie Ventura was going to have the main show on MSNBC going into the Iraq war—except he was anti-war, so they paid him upwards of 10 million dollars just to get out of his contract. They fired Phil Donahue, who was anti-war in the lead up to the Iraq invasion.”

“That’s why many of us were there at RT America,” Camp continued. “It was a tremendous amount of freedom, and I knew there would never be another large-scale television network where I could have that kind of freedom and not be censored.”

Camp’s podcast Moment of Clarity has since been removed from Spotify on the same grounds. Other gems such as the Black radical show By Any Means Necessary have likewise been struck from streaming platforms. On Mar. 1st, YouTube proudly announced that it had “removed more than 1,000 channels and over 15,000 videos for violating our policies around misinformation.” The decision to remove specific platforms and individuals, and the personnel that oversees such decisions, remains totally opaque.

“Any platform devoted to offering inconvenient-to-NATO news or alternative perspectives is guaranteed a very short lifespan,” commented journalist Glenn Greenwald, award-winning publisher of the Edward Snowden documents. “So prolific and fast-moving is this censorship regime that it is virtually impossible to count how many platforms, agencies and individuals have been banished for the crime of expressing views deemed ‘pro-Russian.’”

Even the search engine DuckDuckGo jumped in on the action when it did an about-turn on its corporate ethos of non-interference to announce that it would be down-ranking search results that spread “Russian disinformation,” infuriating its user base.

While these companies claim to be operating for the greater good, it is worthwhile to remember just how integrated they’ve become with the security state in recent years. Google, the owner of YouTube, for example, has a multi-billion dollar contract with the Pentagon in what Wired described as a “thriving defense portfolio.” Silicon tech companies also regularly expend exorbitant sums of money lobbying state officials, and their executives have faced pressure from Congress in recent years to censor what state officials consider misinformation.

In a letter urging members of congress not to use anti-trust laws to break up U.S. tech monopolies, a group of former intelligence and national security officials openly gushed about their usefulness in suppressing dangerous “disinformation” and trumpeted the tech industries tightening relationship with U.S intelligence.

“In response to this heightened threat environment, U.S. technology companies have accelerated their partnership with the U.S. government and its allies to improve our collective defense,” the letter proudly reported. “Both in public and behind the scenes, these companies have rolled out integrated cyber defenses… and moved quickly to block malicious actors on their platforms.”

Even more damning, the largest stakeholders in every single major online platform (including Facebook, Google and Twitter) and 90% of telecommunication companies (AT&T, Comcast, Disney and News Corp) are the notorious Vanguard and BlackRock investment firms—the monolithic financiers with deep connections to the military industrial complex. These two firms together possess over 14% of the shares for Lockheed Martin Corp, the largest arms manufacturer in the world.

They also have massive shareholder stakes in infamous weapon system suppliers like Ratheon, Boeing, Northrop Grumman and General Dynamics. Many stand to gain massive profits from the proxy war currently engulfing Ukraine to the tune of billions of dollars and little from its peaceful resolution.

While online platforms may have less than sincere motivations for meddling with information flows, it should be acknowledged that this in no way exonerates Russia from its culpability in prosecuting an aggressor war. Nor should Pro-Russian sources and propaganda, like any news source, be taken at face-value. But to implement a regime which aggressively eclipses foreign news from view—or worse, uses national security concerns about “disinformation” as a smokescreen to expand repressive and cryptic censorship practices against unrelated anti-establishment voices via blackbox algorithms and closed-door decisions—is an extremely dangerous precedent.

“I suppose this was done in the name of censoring Russian propaganda,” Hedges continued. “Although I have a hard time seeing how a detailed discussion of ‘Ulysses’ or the biographies of Susan Sontag and J. Robert Oppenheimer had any connection in the eyes of the most obtuse censors in Silicon Valley with Vladimir Putin. Indeed, there is not one show that dealt with Russia. I was on RT because, as a critic of U.S. imperialism, militarism [and] the corporate control of the two ruling parties, and especially because I support the Boycott, Divestment and Sanctions movement against Israel, I was blacklisted”

This cultural-political trend of rising intolerance and democratic-leash-tightening during wartime is far from new. The espionage act of 1917 gutted long-held illusions of free expression in the U.S., as anti-imperialists, socialists and labor organizers were accused of treasonous speech and charged with up to twenty years in prison for “profane, scurrilous or abusive language about the form of government of the United States… or the military or naval forces of the United States.” Without shame, statesmen decreed a need to protect democracy through the criminalization of dissent. Private institutions were likewise swept into the frenzy, voluntarily reorganizing society by purging universities, media companies and other enterprises of anti-war voices and dissenting opinions.

Similar waves of repression overtook reason and justice in future conflicts. The infamous Japanese internment camps which detained Japanese-Americans without trial during World War II stand as one example. The second Red Scare during the McCarthy era, where thousands of filmmakers, novelists, journalists, labor organizers, Black leaders and more were blacklisted as socialist sympathizers and hounded by authorities stands as another.

In times of war, our liberties are quickly exchanged for national convenience. This latest iteration borrows much of the same bearings as previous campaigns; acts of violence and vandalism against foreigners; reflexive and hysterical cultural gate-keeping; and the scrubbing of dangerous “disinformation” from public sight.